A Prayer for Owen Meany by John Irving 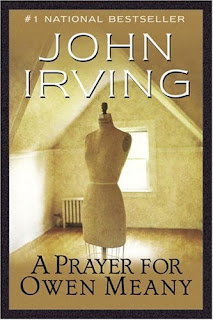 Owen Meany, the only child of a New Hampshire granite quarrier, believes he is God's instrument. He is. This is John Irving's most comic novel; yet Owen Meany is Mr. Irving's most heartbreaking character. (Taken from back of book)

I absolutely loved A Prayer for Owen Meany. I think it was the best required summer reading book I have ever had to read. And I know that the summary is vague, but I couldn't really think of anything better. For those of you who have never heard of Owen Meany, you might recognize the movie Simon Birch, which is based off of this book. I have never seen the movie, so I can't compare the two. But onto the review!
This book was perfect. It has some hilarious moments where I was literally laughing out loud, but at the same time it is so sad. It's a good mix of the two emotions. John, the protagonist, is a good narrator, who provides a ton of information to the reader. I like how the story wasn't exactly linear, but would go back in time and forward in time. If I was writing this book, I would be totally confused, but Irving has somehow skillfully crafted this book to make sense. There was a lot of interesting (and smart) discussion on religion that fascinated me. There were some important religious issues present, such as fate vs. free will and faith vs. doubt. I also liked how the book focused on the intellectual side of religion and never preached about Christianity. When I finished Owen Meany, I couldn't stop thinking about it. It was so heartbreaking, but at the same time it was a fun novel to read. If you want to read something that changes your outlook on things, I would definitely recommend A Prayer for Owen Meany.
9 out of 10.
Posted by Simply_Megan at 4:01 PM 2 comments:

Actually, I've been back since Monday. But I've been very busy unpacking, going to tennis practices and games, and finishing up my summer reading. I have a few books to review, but I honestly don't know when I will get around to posting reviews because I procrastinated (as usual) and have a ton of summer work left. So I'm going to try really, really hard to post something soon. I also wanted to blog about my trip, but I might not have time for that either. But anyway, I'm officially back and still keeping up with my email, so if you email me I'll get back to you soon!
Posted by Simply_Megan at 10:41 AM 1 comment:

I just wanted to let everyone know that for the next ten days I will not be around, due to the fact that I'm going on vacation! Tomorrow me, my brother, and sister are flying down to North Carolina and staying with my aunt, uncle and cousins. Then, on Saturday, they're hosting an anniversary party for my grandparents (it's their 50th!). I'm really excited because I going to get to see a lot of family that I haven't seen in awhile. And then later next week, my aunt, uncle and cousins are taking me and my siblings to their beach house in South Carolina. So I might be able to check my email occasionally, but I won't be posting any book reviews. Still feel free to email and/or comment, and I'll definitely get back to you after August 24. Hopefully, I'll get a lot of reading done, and I'll post some pictures when I get back!
Posted by Simply_Megan at 4:53 PM 9 comments: 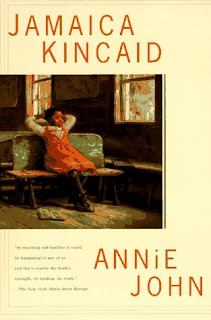 Jamaica Kincaid's Annie John tells the story of a girl's painful growth into young womanhood. Annie Victoria John, the narrator, progresses from a blissful childhood in Antigua, when she is the center of her mother's attention, to a trying adolescence filled with fierce maternal conflict, to her departure from Antigua for England at the age of seventeen. (Taken from SparkNotes)

I know that this summary isn't a very good one, but there really is nothing to this book. It's told in the first person point of view and is pretty much all about the life of a young girl named Annie. She grows up, makes new friends, rebels against her parents, feels animosity towards her mother, the usual adolescent stuff. It is the ultimate coming of age story, rife with symbolism and themes that I was unable to discern. Yes, this was another summer reading book and a much easier read than The Shipping News. For one, it was a lot shorter: only 148 pages to the 300+ of The Shipping News. It was also more interesting to read and in my opinion better written than the former. As I stated before, there was a lot of literary signifcance to this book that I did not figure out, and I cannot understand how anyone else can figure it out. So I'm resorting to SparkNotes once again to try to do my summer work. But if you ever have to read this book for school, just know that it's a short and fairly easy read.
5 out of 10.
Posted by Simply_Megan at 6:30 PM 3 comments: 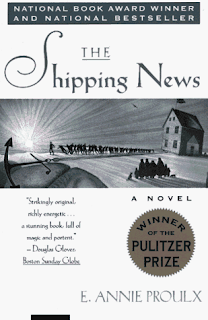 At thirty-six, Quoyle, a third-rate newspaperman, is wrenched violenty from his workaday life when his two-timing wife meets her just desserts. He retreats with his two daughters to his ancestral home on the starkly beautiful Newfoundland coast, where a rich cast of local characters all play a part in Quoyle's struggle to reclaim his life. As three generations of his family cobble up new lives, Quoyle confronts his private demons - and the unpredictable forces of nature and society - and begins to see the possibility of love without pain or misery.

A vigorous and darkly comic, and at times magical portrait of the contemporary American family, The Shipping News shows why Annie Proulx is recognized as one of the most gifted and original writers in America today. (Taken from back of book)
So this is the first summer reading book I read. It took me about a month to finish it, and only because I decided to read other things in between because I hated it so much. Yes, by the fortieth page, I loathed this book. I didn't like the main character Quoyle at all. He had no backbone and allowed everyone to walk all over him. I would later find out, thanks to SparkNotes, that Quoyle's exaggerated misery is written to be almost comedic. I also could not stand the writing, which is extremely sparse and prone to incomplete sentences. A sample phrase would read as: The aunt walked upstairs. Forgot her scarf. Got into the car. I just didn't understand why the author would decide not to use pronouns.
But, as I forced myself to read The Shipping News (it was summer reading, after all), I started liking it more. I got used to the writing and the style and the characters. I wouldn't go so far as to say that I enjoyed it, but it was bearable. Which is disappointing because it did win the Pulitzer Prize, so you would think that I would like it. I did like that Quoyle's character changed and he learned a lot about himself by the end of the book. That transformation redeems the book slightly in my eyes.
5 out of 10.
Posted by Simply_Megan at 8:53 PM 2 comments:

As you can see, Simply Books has a new background and header! It was made by Kelsey of Just Blinded Blog Makeovers. Didn't she do a great job? Now my blog isn't boring. But unfortunately, I lost all my sidebar elements, so it will take some time to get them back up. I also lost my blogroll, so if you would like to be added, please leave a comment with your URL. Thanks!
Posted by Simply_Megan at 4:05 PM 8 comments: