Posh and Prejudice by Grace Dent 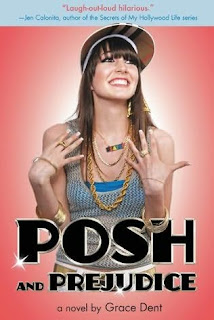 The divine Shiraz Bailey Wood is back in this hilarious sequel to Diva Without a Cause to enlighten us with her signature brand of madcap humor on her demented, glorious life in the gritty suburbs of London.When sixteen-year-old Shiraz Bailey Wood's year-end test results come in, she's astonished to discover not only that she passed them all, but that she's actually clever! Emboldened by an invite to higher-level classes, Shiraz enrolls in Superchav Academy's "Center of Excellence" to get even brainier. Hanging with goody-two-shoes types in higher-level classes seems like just the ticket to avoid getting stuck forever in her crap hometown. But Shiraz has to figure out for herself: are these posh types really any better than she, or do they just want to stick their noses up at everyone? (Taken from Amazon)

I read this book a really long time ago, so I don't remember it too well. Sorry about that. But I can still write a review about it! The one thing that I like and dislike about these books is that they are set in England and written by an English author. I think it's a good thing because I like learning about different cultures and broadening my horizons. But I hate that I sometimes don't understand the slang and usage of certain words. So that could be a deciding factor when you see this book in the library or bookstore. But the characters, especially Shiraz, are interesting and really funny. Shiraz sometimes comes off as stupid, but she is actually really smart, which I like. Her family is working class, and I like that she is able to leave that behind and continue with her education in the "smart" classes. I think that it's a story many people can relate to and will hopefully inspire people to continue school even if your family doesn't encourage it.

Death of a Salesman by Arthur Miller 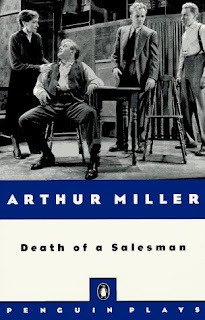 The tragedy of a typical American--a salesman who at the age of sixty-three is faced with what he cannot face; defeat and disillusionment. (Taken from Amazon)

That summary is short and sweet, huh? Well, I think it pretty much captures the theme of the book. Death of a Salesman is about an elderly man, Willy Loman, who realizes that his life did not turn out how he planned. He's not the rich, successful and popular salesman he aspired to be and his two sons are lazy and not the adored children he thought they were. The play shows how Willy has this revelation that his life isn't perfect and brings him back to reality. I thought that Death of a Salesman was an okay book/play. It was pretty easy to read: very short and the writing was simple. The problem was I just wasn't that interested in it. We were discussing in class Willy's character, like whether we pitied him or didn't like him and I realized I had no opinion. I didn't care one way or another about the play or any of the characters in it. I was completely opinionless on the subject, which is really weird for me. Sorry about the non-review, but I thought I should say something on it because I did read it.
5 out of 10.
Posted by Simply_Megan at 9:48 PM 1 comment: 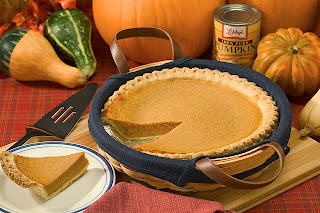 Happy Thanksgiving! I know I'm ready to dig into some turkey, mashed potatoes and pumpkin pie. My grandparents are coming over later this afternoon and my cousin flew up from North Carolina to stay with us. So I think it will be a fun holiday. What are your Thanksgiving plans?

And there is a giveaway at Suko's Notebook. She recently read and reviewed Jenny's Dream by Linda Weaver Clark and is now holding a contest for the book. Click here to get more information, and the contest ends on December 7.
Posted by Simply_Megan at 1:32 PM No comments:

So this year I participated in the 2009 Debut Author Challenge. I challenged myself to read 15 books, and I've read 12 so far, which is pretty good. And some of the books I'm reading now can be used for the challenge, so I should be good to go. I really like this challenge and I'm glad that Kristi (The Story Siren) is hosting it again. So here is the partial list of books I hope to read for the 2010 Debut Author Challenge.
1. The Body Finder by Kimberly Derting
2. The Line by Teri Hall
3. All Unquiet Things by Anna Jarzab
4. The Secret Year by Jennifer Hubbard
Posted by Simply_Megan at 3:21 PM 2 comments: 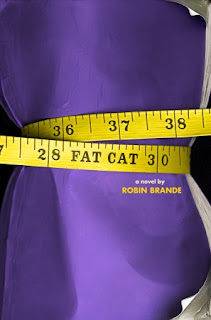 Catherine Locke has always been overweight. It's hard for her to stay away from those candy bars, Diet Cokes, and chips. But when she has to do a science project on hominins, early ancestors of humans, Cat sees herself as the perfect subject. She decides to change her lifestyle and eating habits to those of the hominins, and see if she can be healthy for once in her life. Only eating organic and nutritious foods and walking instead of driving, Cat sees the pounds practically melt away. But with her new body comes a new problem: boys.

I loved this book! I could stop reading Fat Cat. I loved the characters, especially Cat. She was really smart and I thought her science project was so unique. I liked seeing her become healthy and was happy that she finally became comfortable in her own body. I also really enjoyed reading about her foray into the world of boys. Robin Brande really knows how to get into the mind of a teenager and wrote Cat's thoughts and ideas wonderfully. I would recommend Fat Cat to any fans of young adult literature. 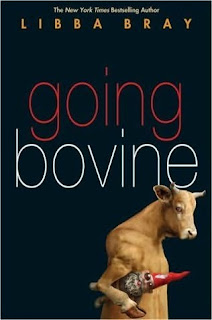 Cameron Smith is the king of low expectations. To him, not caring equals minimum disappointment, so he doesn't put an effort into school, his job, or his family. It seems that his life is going nowhere - that is, until he contracts Creutzfeldt-Jakob disease, also known as Mad Cow disease. Cameron's illness is fatal, but there seems to be hope when he is visited by a sugar-loving angel named Dulcie. According to Dulcie, Cam must embark on a journey that will simultaneously cure his disease and save the world. Accompanied by a dwarf and a talking yard gnome, Cam must outwit evil wizards, fire monsters, snow globe fanatics and a happiness cult in order to save himself and humanity.
When Libba Bray announced the synopsis for Going Bovine, I thought it was a joke. It sounded so weird that I was certain she was just joking around. But I was wrong. I probably would never have read this book because it sounded so odd; but I love Libba and thought I would give it a try.
Going Bovine was a very interesting novel. The author, Libba Bray, is also known for her Gemma Doyle Trilogy, which is completely different than this book. It was weird going from the historical fiction/fantasy that is Gemma Doyle to the present day/craziness that is Going Bovine. I'm not lying when I say that this book was really weird. It was weird in a good way, but still just totally out there. Cameron's journey is set in our world, but there were some fantastical elements, like talking yard gnomes and punk-rock angels, that kept things lively. I must say that I liked the juxtaposition of real life and fantasy, even if I sometimes didn't get it completely. The crazy parts, along with the witty dialogue, made this book extremely funny. There were several times that I laughed out loud. I also liked that the reader never knows if what is happening is real or just a dream, which leaves the book open for interpretation. But even with the weird parts, Going Bovine was also surprisingly deep and heartfelt and somewhat a commentary on our addiction to reality TV shows. The only negative is that this book is LONG. Like 480 pages long. The reason I haven't posted anything in such a long time is that this book took me forever to read. So I think it could have been shortened a tad, but it was still a fun read.
7 out of 10.
Posted by Simply_Megan at 6:35 PM 1 comment: