The Karma Club by Jessica Brody 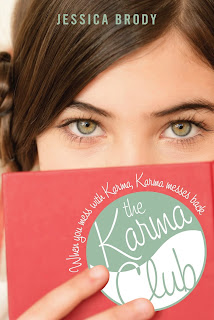 When you mess with karma, karma messes back.

Maddy has a pretty good idea how karma works - you do good things, good things will happen to you in return and vice versa. But when she catches her boyfriend kissing popular girl Heather, nothing happens to him; instead he get a hot new girlfriend! Maddy decides to take matters into her own hands and starts the Karma Club with her two friends Jade and Angie. They are determined to right the wrongs the universe has forgotten and get payback for all the bad things guys have done to them. But when karma takes control and unfortunate things start happening to Maddy, she'll have to figure out how to balance the universe again.

I enjoyed The Karma Club. It was a quick read, but I really liked the concept of it. Karma is something a lot of people believe in, and yet it doesn't pop up in young adult literature (or popular culture in general) too often. I wonder why that is? I don't know if it's real, but I definitely like the idea of karma - who doesn't want to be rewarded for the good things they do? Obviously, we know the world doesn't keep perfect score but that's okay. At first in The Karma Club, Maddy thinks that karma is taking a vacation and decides to do bad things to the people that have done bad things to her and her friends. This sounds a little like revenge, but Maddy is a likable enough character that you sympathize with her. And some of the plots they come up with are hilarious. But as bad things start happening to Maddy, she realizes that you can't go after the bad people, you just have to make sure you do good things. It was a really positive message, how you can only control your actions and even though karma isn't perfect, it's not an excuse to not help others. By the end of the book, Maddy is a regular Mother Teresa. I thought that it was awesome that such a light-hearted book as The Karma Club came with a message so deep and almost profound. It's actually thought-provoking, believe it or not. I think The Karma Club is fun book if you want some laughs, or are looking for something to give you a new perspective on life. And those books are hard to come by.

Check out the Amazon page for a great book trailer!

FTC: This book was provided to me through the Henry Holt InGroup review program.
Posted by Simply_Megan at 10:11 PM 3 comments:

Before I Fall by Lauren Oliver 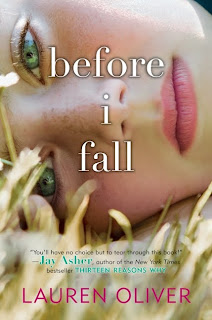 It seems like Samantha Kingston has it all: three best friends, a cute boyfriend and adoring students at her high school. Sam is popular, and though she feels guilty at times for the way she and her friends treat other students, she still loves her life. That is, until Friday, February 12, when Sam and her friends get into a car accident, and now Sam is reliving the day over and over again. She doesn't know what to do or how to break the cycle; all Sam knows is that she's been given a chance to do-over her last day, and she better make the most of it.
I really enjoyed reading Before I Fall. The novel was so original, because even though I have read books that involve a dead protagonist, this one had one day repeating over and over again. This concept might seem boring, but each day Sam does something different and the author reveals new information that makes you want to keep reading. I also really liked Sam as a character. In the beginning, she's not the nicest person: she's rude to other students at school and shows no respect to her parents at all. I liked that Sam wasn't perfect; sometimes you read these books where the protagonist is pretty, nice, has a normal family. Sam had all these things but she was just a jerk to a lot of the other kids at her school. However, as the novel progresses, Sam begins to appreciate life more and see the mistakes that she has been making. I also loved that the book didn't have the normal, cookie-cutter happy ending. It was unexpected but the author took a different route than most other people would, which I liked. Overall, I thought Before I Fall had a great message, to appreciate every day, and I think the author executed her ideas flawlessly in a well-written story.
8 out of 10.
FTC: This book was provided to me through the Flamingnet Student Review Program.
Posted by Simply_Megan at 2:32 PM 5 comments:

The Metamorphosis by Franz Kafka 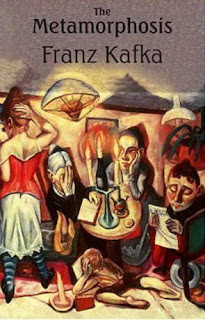 "When Gregor Samsa woke up one morning from unsettling dreams, he found himself changed in his bed into a monstous vermin."

With this startling, bizarre, yet surprisingly funny first sentence, Kafka begins his masterpiece, The Metamorphosis. It is the story of a young man who, transformed overnight into a giant insect, becomes an object of disgrace to his family, an outsider in his own home, a quintessentially alienated man. A harrowing - though absurdly comic - meditation on human feelings of inadequacy, guilt and isolation, The Metamorphosis has taken its place as one of the most widely read and influential works of twentieth-century fiction. (Taken from back cover)
The Metamorphosis had to be one of the weirdest books I have ever read. Well, it's more of a novella because it's only 55 pages which is nice. I like short books, especially when they're for school. And the writing was really easy to read. It was written in the early 1900s, but it's part of the Modernist period, so the language is pretty similar to what we're used to seeing. That being said, the subject matter was so bizarre. The main character, Gregor, wakes up one morning and discovers that he has transformed into a giant cockroach. Now, I don't like big bugs. Little flies and spiders I can handle, but I'm afraid of anything tarantula-sized. So reading this book started freaking me out because I was imagining a big huge cockroach just sitting there in someone's house. So if you're afraid of bugs, I don't recommend this book. Besides the weirdness, the book did a good job of showing Gregor's isolation and solitude. His family practically disowns him and shuts him up in a bedroom, coming in every once in awhile to clean and give him some food. The author, Franz Kafka, had some of the same problems with his family, feelings of inadequacy, alienation, etc so you could tell where he got the inspiration for The Metamorphosis. It was a weird, slightly frightening book, but it has some good material for an essay so it might be a good choice for a research paper or something similar.
6 out of 10.
FTC: I borrowed this book from school.
Posted by Simply_Megan at 4:56 PM 1 comment: 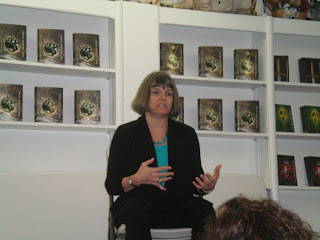 So tonight I got to see Cinda Williams Chima live and in the flesh. For those of you who don't know, and some might have never heard of Cinda because she's not terribly popular, she wrote the Heir Chronicles which include The Warrior Heir, The Wizard Heir, and The Dragon Heir. She was out and about to promote her new book The Demon King, which is the first of a 4 book series called The Seven Realms. If you can't tell these are fantasy books and very good.

Cinda came out at 7 to a fairly intimate group. There were maybe 20 people there, a mix of parents and kids. I think me and my friend Molly were the oldest (besides the parents, of course) but I didn't feel like too much of dork because the books do have characters who are like 16 years old. Anyway, she was very interesting and very very nice. Cinda talked a lot about what's it's like to be a writer and all the books she has planned for The Seven Realms series. She also let us in on a somewhat secret: that she's writing two more books for The Heir Chronicles. It hasn't been officially released yet, so you didn't hear it from me. 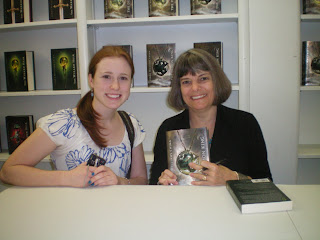 A lot of the stuff Cinda said can be found on her website, so I'm not going to type it all out here, but I learned some interesting facts about her (like her name is based off a character in a book, which I think is so cool) and that she hates to outline before writing.

This is me and Cinda holding a copy of The Dragon Heir. It was released in October, but I still haven't read it, so this was a good time to buy it. Here is what she wrote in my book 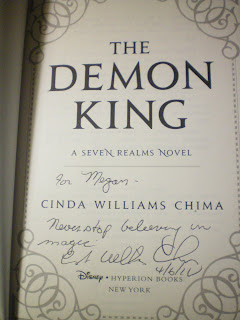