The Secret Life of Prince Charming by Deb Caletti 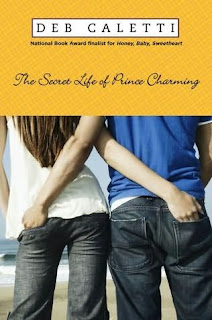 Since she was young, Quinn has constantly heard about how awful men are. Her mother, aunt, and grandmother have all been in bad relationships, and feel the need to warn Quinn about the men she should stay away from. This, unfortunately, also includes her dad, who has just recently come back into her and her sister's lives. But when Quinn discovers that all of her father's "prized possessions" are actually things he's stolen from the women he's been with, she decides to right her father's wrongs. Quinn calls up the half-sister she barely knows, and they set out to return the items that their father has stolen. On this roadtrip, Quinn learns the truth about her father, mends the hearts of some of his exes, and might even mend hers along the way.

I absolutely loved this book. The whole idea for it was just amazing. I loved the fact that Quinn and her sisters were riding around and delivering the objects to their rightful owners. A lot the women that their father had dated or married were really nice people, and the objects were some of their prized possessions. The fact that they drove all around the state of Washington and even into Canada was so cool. I wish I could do something like that. I also liked how Quinn and her sister Sprout hardly knew their half-sister Frances Lee, and yet they got in a car with her to complete this quest. The three girls became so close, and it was nice to see everyone grow into a family.
Every so often, there would be a story or little passage from Quinn's family, or from the women that her father dated, and it was talking about love and giving advice on love. Some of the things Deb Caletti wrote were so true, and they were things that everyone knows, but they don't know they know it until someone has the ability to articulate it into words. Here's an example of Caletti's insightfulness: "She said a marriage is like a well-built porch. If one of the posts leans too much, the porch collapses. So each must be strong enough to stand on it's own. I've thought about this over the years, and I've seen many a porch collapse. To know that you can stand alone, to know that he can too - it seems very good advice." Now, how true is that? And the whole book was full of little truths about love and relationships.
Overall, the book was quirky, smart and heartfelt. Quinn was a great protagonist and she developed into a very interesting character throughout the book. She really grew up and learned a lot about relationships and love. It was so sweet to see everyone become a family over their four-day journey. And there were some really funny moments thrown in there, too, making this book a worthy read.
9 out of 10.
Release Date: April 7, 2009
Posted by Simply_Megan at 9:58 AM

I like it. Hopefully I'll get to read this one ^^

I also adored this book. So I'm curious (or maybe just hopeful that someone will feel the same way I do), how do you think The Secret Life of Prince Charming rates in relation to Caletti's other books?

Well, the only other Caletti book I've read is Honey, Baby, Sweetheart and I like The Secret Life of Prince Charming a lot better. So far it's my favorite :)

This looks really cool. Love the cover! Thanks for recommending!

It sound really unique! Its such a cool idea!

Great review! Made me all the more excited to read it. =)

oh thanks for the quote. sounds like a nice book. i've been interested in it for awhile now, but i want to read it MORE now.