The Boleyn Inheritance by Philippa Gregory 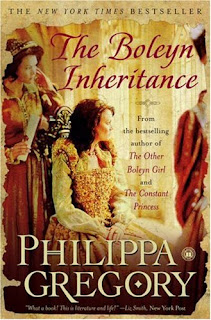 Anne of Cleves is chosen as Henry VIII's fourth wife, and she is happy to escape her conservative mother and condescending brother and come to England to be queen. But her immediate disgust at the king's elderly appearance causes a rift between the two that cannot be repaired. When the king is through with Anne, he turns to young, beautiful and shallow Katherine Howard, who is in love with not the king, but one of his courtiers. A forbidden romance is recipe for disaster, as Lady Jane Boleyn knows all too well. With the help of her uncle, the Duke of Norfolk, Jane attempts to guide Katherine in the right direction, but that direction might end up being the Tower and the scaffold. Told in alternating points of view, The Boleyn Inheritance chronicles the lives of Anne, Katherine and Jane, and ties them together with their shared Boleyn inheritance.

Wow. This book was a million times better than The King's Rose, which is also about Katherine Howard. The Boleyn Inheritance is told through the point of view of three women, but it flows beautifully and is not choppy in the least. The first book I read by Philippa Gregory was The Other Boleyn Girl, which was amazing. I wanted to read more of Gregory's Tudor series, but was afraid that they wouldn't be as good, or I wouldn't like them. Well, I was proved wrong. I don't think The Boleyn Inheritance is as good as The Other Boleyn Girl, only because Anne Boleyn is my favorite person to read about, but is was still a great book. The writing was flawless and the details were written so well that I felt like I was in the story with all the characters. Gregory has really perfected writing about this time period and she is probably my favorite historical fiction author. The characters and plot are so interesting that I could not stop reading. Even though most people already know what happens at the end, it's fascinating to see how it all happens and see the thoughts and feelings of these historical figures that not much is known. If you like Tudor England, or just historical fiction, Philippa Gregory is an author you must check out.
9 out of 10.
Posted by Simply_Megan at 10:13 AM

I love this time period! I really need to read this one.

Thanks for the great review!

I've read a couple of the books in this series. I really need to buckle down and figure out where I started and where the series goes so that I know which title to read next! Thank you for the review!!

I've read The Other Boleyn Girl. Its good so Im definitely going to check this one out.