The Diamonds by Ted Michael 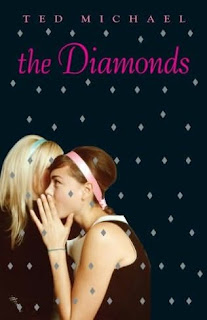 Marni Valentine is part of the Diamonds, a group of the most popular girls at the prestigious Bennington School on Long Island. Along with her friends Clarissa, Lili, and Priya, Marni commands the respect of all her classmates. But when the Diamonds are asked to join the mock trial team, the girls take their power a little too far. Clarissa decides to use mock trials to resolve disputes between classmates, something all the teachers and faculty love. But when the Diamonds start bribing jury members and influencing the decisions of the court with a bias, Marni starts getting a little wary of what's going on. It's not until Marni is caught kissing Clarissa's ex-boyfriend and is promptly excluded from the Diamonds that she decides to take action against the Clarissa's corruptness. She assembles a group of students that have been victimized by the Diamonds to bring justice where it is due.

I was pleasantly surprised by this novel; it was a lot better than I expected it to be. From the summary on the back, it seems like another Gossip Girl or The Elite, but in fact it was a lot different. It was less about rich, popular girls, and more about a corrupt court system at a private school. The set-up was actually pretty interesting. Bennington has a mock trial team, like a lot of schools do, and the Diamonds decide to use it as a forum to resolve disputes between classmates. So people who have gotten in fights or cheated on their boyfriends come and the Diamonds decide who's guilty and deliver a punishment. The faculty is so impressed that they allow the Diamonds to give out detentions and suspensions, which is something a regular school would never allow. But Clarissa, the corrupt politician that she is, bribes the jury and bribes students to testify against each other, so she can put her "frenemies" in their place. The faculty and club advisor are oblivious to everything that's going on, so we have four girls who are practically running the school. A plotline not often seen in literature, so Michael has the originality factor on his side. What was also cool was all the references to the Constitution and other legal documents in US history. It seemed like the author really did his research. From my summary, I'm sure you can guess the ending, but there were some twists and turns that were unexpected. I really liked this book and think that anyone with an interest in law or history will especially enjoy this informative, and at times comedic, novel.
8 out of 10.
Release Date: April 14, 2009
Posted by Simply_Megan at 8:38 PM

Looks like it could be good! I'm glad that you liked it. I'll have to check it out :o)

This sounds like a pretty good book! Now I know what to buy for my law-loving friends when their birthdays arrive. :)

Also, I nominated you for the Zombie Chicken award!

This looks fun, great review. Glad it's more than another Gossip Girl rehashing!

sounds like it's gossip girl meets Law and Order.... lol.