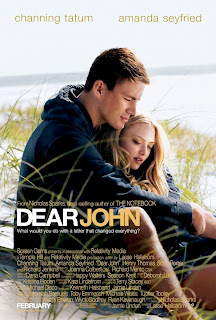 To read my review of Dear John by Nicholas Sparks, click here.

On Friday, I saw Dear John. It has two of my favorite actors in it, and I pretty much read the book just so I could watch the movie. But since I was a little disappointed in the book, I was extra curious to see if I would like the movie verson better.

Dear John The Movie was a lot different than the book. I won't go into too much detail (see spoiler section), but the ending is completely different. I actually liked the movie ending better. Overall, I loved the scenes with Amanda and Channing; they are both really good actors and have a lot of chemistry together. I also thought the movie flowed better than the book so fans of romantic comedies will enjoy Dear John.

As I stated before there were a lot of differences between the book and the movie. In the movie, there is a greater emphasis on the letters, with a big chunk of the movie dedicated to John and Savannah writing/sending/receiving letters. In the book (even though it's titled Dear John) we only get to read two letters, both from Savannah. So the movie wins on that point.

In the book, Savannah marries her best friend Tim and dumps John for him. Tim also has an autistic brother Alan. This is the same in the movie, but the movie fails in that Tim is like fifteen years older and Alan is his son. The movie plays Tim off as a family friend, but the actor is even fifteen years older than Amanda Seyfried so it was pretty gross that they got married. It didn't make as much sense.

In the book, Tim has skin cancer and needs money for an experimental drug. John anonymously donates the money and Tim is cured. In the movie, Tim has lymphoma and the money John donates just gives him a few extra months, so he dies. Then the ending is very cliffhang-y, in that Savannah sees John on the street after Tim has died and walks up to him, with the audience not knowing what happens. I like this one much better because, sorry Tim, Savannah and John belong together.

I enjoyed the book and movie, even though there were things I didn't like in both. I have mixed feelings for both, so but I'm going to say that I liked the movie better because I liked the ending.
Posted by Simply_Megan at 10:31 PM

i saw this movie too. Really romantic, great family movie, i saw it for free on www.moviecomfort.com

I haven't seen the movie yet or read the book. And I've heard not to watch the movie after reading the book because it will be disapointing. Great post!

I saw the movie last week, i would have to say it was one of the best romantic films i have saw. the unexpexted twist in the movie made evey person in th theatre gasp. The only thing i owuld criticise is the eding of the movie, me and my friends felt robbed of a great ending. Although havin said that it as everythin i wanted it to be up until then. Cant wait to read the book

I just finished the book yesterday and I crid so hard; but I loved the book so much. It was an amazing story. I'm going to buy the movie when it comes out because I loved the story so much. I have read and heard that the movie differs from the book. But I like the idea of John and Savanah ending up together because they deffinately belong together. I'm sure I will shed the same amount of tears watching the movie as I did reading the book. ♥

Nothing is accomplished by reading a beautiful hear-breaking, honest story of love and loss only to turn around and place a gold star of the hollywood kissed sugar coated version. The book and the movie are more different than they are alike. Nicholas sparks understands, magically, how and where the brain and the heart find common ground. He has created a masterpiece in the ending of Dear John. Without John selflessly offering up the rest of his life to suffering and allowing Savannah to spend her life doing the right thing there is no story. Everything in the book is one stone stacked onto another; if John does not walk away from Savannah in the end with the image of her and Tim burned into his psyche the stones crumble onto each other. To enjoy a pile of stones over a piece of heart filled artwork is a lack of intelligence and truth in oneself. Enjoy your happily ever after; we'll be sitting on the porch of reality when you're ready to join us.

Dear John was my favorite book because it showed that even people who belong together sometimes dont end up in the end. It was a great love story, not the kind where they end happily ever after, but still loved each other even though they werent together. I loved the symbolism of the moon, that as long as they love each other, every full moon they will think of each other. I cried sooo hard in the end when John goes to Savannah and Tim's place, not letting them know that he was there, and saw Savannah go outside to the full moon, and John seeing that Savannah still loved him. it was sooo heartbreaking and also heartmelting for me, since even though they didnt end up together, it didnt mean that they didnt love each other. Not the way they made the movie, which disappointed me to the highest level. Book definitely wayyyy better than the movie :D

is the moon part in the book, if so where abouts? like begining, or middle, or ending?

I definatly loved the book much more than the movie, for two reasons. The ending was so good in the book, because it showed true love with him giving everthing he had so the girl he loved would be happy. Also, the book seemed to put so much more emphasis on the father-son relationship, and it was those chapters that brought me to tears in both book and movie. The movie didn't do that relationship justice.

I delayed watching the movie because even though I loved the book the ending was so sad. I was pleasantly surprised by the ending of the movie and definitely agree that John and Savannah belong together..

I saw the movie first. And I absolutely LOVED it. It probably doesn’t hurt that Channing Tatum is absolutely gorgeous! LOL! But anyways…like I said I adored the movie.

I’ve watched it over and over and over. I can’t get enough. The other day I decided that I should read the book. I read it all in the same day. It was nice to be able to put some faces to names. I will agree that the book and movie have a lot of differences. Some really bothered me. Others, I welcomed.

I’m sure that if I read the book first, I would’ve been disappointed in the movie. But since I saw the movie first, I can't say I'm disappointed!

The book had a theme of unconditional and unrewarded sacrifice. Like it or not, it was a dose of reality. The movie destroyed that theme for me with its fairy tale "they lived happily ever after" ending. I loved the book and due soley to the ending, hated the movie.

I hated the ending. I read novels for the happy ending, if I wanted reality I would go watch Oprah. I don't have a problem with sad endings necessarily, I just don't like it when true love is messed with.

I read the book (and I loved it) I thought it was one of the most romantic books ever- it was true love. Sacrifice is love. The movie however, I did not like. It was okay- I'd rate it maybe a solid C+/B- it was just like all those other romantic movies- where the two end up together. Too predictable. Dear John the book ended in away where Sparks could write a sequel but the movie ended happily ever after...well life isn't always like that. Bottom line- the movie was not good the book was great!

Well i saw the movie last year..when i finished seeing it i loved it because it reminded me of my boyfriend n i ..but now that i left him for someone else..just like Savannah did i watch it over n over n over again i cry so many times its a great movie<3 im going to get the book soon(: i hope i live happily ever after like the movie...i mean its crazy how its everything so alike to mt life;/

I just hate the open endings both in a movie and book! I agree about the mixed feelings :) However, Sparks is still my absolute fav

I like the ending of the movie than the book because for me, John and Savannha belong to each other because savannha never loved Tim as much as she loved John. The ending is quite good but im expecting more. A kiss will do maybe!

Well of course everybody is looking for a happy ending but the difference in the ending of the book and the movie is actually smfn that brings out the true depth of John and Savannah's love like yes it wud hv been easy to just gt away wd Tim and them gtng bk together but the fact that they love each other but still john realising tim needs savannah and doing what is right like selfless is just amazing ... I liked what Simone just wrote in one of d comments that the book shows us how even the pple who belong wd each other don't end up together ...