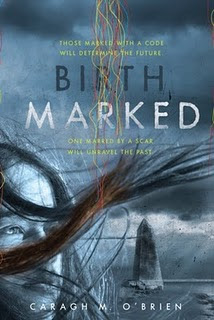 In the future, in a world baked dry by the harsh sun, there are those who live inside the wall and those, like sixteen-year-old midwife Gaia Stone, who live outside. Gaia has always believed it is her duty, with her mother, to hand over a small quota of babies to the Enclave. But when Gaia's mother and father are arrested by the very people they so dutifully serve, Gaia is forced to question everything she has been taught to believe. Gaia's choice is now simple: enter the world of the Enclave to rescue her parents, or die trying. (Taken from the inside flap)

Birthmarked is one of the best books I have read in a long time. It's a dystopian novel, and we all know that futuristic dystopias have a small place in my heart. I really don't know why, but I love these types of books, and Birthmarked is no exception. Since this is an ARC, there an editor's note in the front of the book, and she states that Birthmarked is like "The Handmaid's Tale meets The Hunger Games," with which I heartily agree. As in The Handmaid's Tale, there elements of the caste system found in Birthmarked (the people who live inside the wall vs. those who live outside) but also the disbelief of having to turn children over to a totalitarian government (Gaia has to give three babies a month that she delivers to the Enclave).
There are parts of popular dystopian novels found in the book, but it is still original and fresh. Speaking of characters, Gaia was a great protagonist: she's brave, smart, resourceful and will do anything to save her parents, nothing short of breaking into the Enclave to find them. There is also a love interest, Leon, and he was also an interesting character. At first, it's almost a forbidden love, because he's a soldier employed by the Enclave, but there's some mystery because Leon has a past that he refuses to speak of. There's also mystery as to what the Enclave wants with Gaia's parents, but I felt that aspect of the story fell short of my expectations. What the Enclave wants isn't that unrealistic or evil and almost makes sense in context. So I thought that part could have been written differently. However, I thought that Birthmarked was a brilliant novel that could not be put down and will be greatly enjoyed by all readers.
9 out of 10.
Release Date: March 30, 2010
FTC: I received this ARC from Henry Holt's InGroup Review Program.
Posted by Simply_Megan at 7:01 PM

I am new to your blog, but I am having fun reading your reviews. This book sounds like it would be too hard for me (I am ten), so I will keep watching your reviews for one that is good for me.

You are a very good writer.