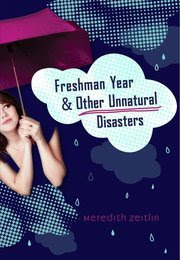 Summary:
Kelsey Finkelstein is fourteen and FRUSTRATED. Every time she tries to live up to her awesome potential, her plans are foiled – by her impossible parents, her annoying little sister, and life in general. But with her first day of high school coming up, Kelsey is positive that things are going to change. Enlisting the help of her three best friends — sweet and quiet Em, theatrical Cass, and wild JoJo — Kelsey gets ready to rebrand herself and make the kind of mark she knows is her destiny.

Things start out great - her arch-nemesis has moved across the country, giving Kelsey the perfect opportunity to stand out on the soccer team and finally catch the eye of her long-time crush. But soon enough, an evil junior’s thirst for revenge, a mysterious photographer, and a series of other catastrophes make it clear that just because KELSEY has a plan for greatness… it doesn’t mean the rest of the world is in on it.

Kelsey’s hilarious commentary throughout her disastrous freshman year will have you laughing out loud—while being thankful that you’re not in her shoes, of course… (from GoodReads)

Review:
I thought that Freshman Year & Other Unnatural Disasters was so cute! Even though I'm 20, I still loved reading about Kelsey and all her freshman year antics. It helped that she was pretty mature for her age and also hilarious. If I enjoyed this, I'm sure a younger audience will love it even more.

I actually had a pretty good time in high school, so it was nice to see someone enjoying herself as well. Not that Kelsey didn't have problems, but they mostly revolved around a soccer bully, boring classes, and getting really awful candid shots in the school newspaper. She did have a pretty big fight with one of her friends, but by the end I think Kelsey had a successful freshman year.

Kelsey's voice and narration were great. It's written in first person so we get all of Kelsey's commentary on school, her family, and life in general. There were several times that I was laughing out loud, so it was good that I was reading this alone.

Basically, if you like stories about humorous high school experiences, then you will enjoy this, no matter what your age.

I realyl want to read this one but its not available in the UK yet... I might have to send more pennies on it though as it sounds adorable!