Book vs. Movie: The Mortal Instruments - City of Bones 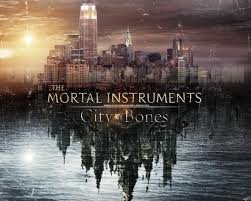 I was thrilled when I heard that City of Bones was going to become a movie - I am a huge fan of the series along with Cassandra Clare's other works. I even went to one of her book signings! My excitement began to wane when I found out that Jamie Campbell Bower was cast as Jace (not really a fan of the actor) and I heard how poorly it did at the box office. Nonetheless I still had to see the movie!

Overall, I definitely enjoyed The Mortal Instruments, though I'm not sure why we're calling it by the series name. The movie hit all the major points of the book and I thought the actors did a fairly good job. Some of the fight scenes were pretty exciting and made the movie fun.

Most of the casting was spot-on (with the huge exception of Jace) because I loved Lily Collins as Clary, Robert Sheehan as Simon, Godfrey Gao as Magnus, Jonathan Rhys Meyer as Valentine and Lena Headey as Jocelyn. Their accents were so fun to listen to, even though it was a little weird that everyone had British accents. When people were speaking with American accents (for example, Magnus) it actually sounded grating! I guess I was used to all the fancy proper language!

There are definitely changes to the plot, so all you book purists might not enjoy that aspect. Some of the changes made sense because they cut back on the running time but other ones confused even me, who has read the series more than once! The ending is changed a lot - a big plot twist is given away; I assume it's in case the second and third movies aren't filmed. They altered Jace and Valentine's relationship but it actually made it more confusing! I didn't understand why they just didn't take it straight from the book. The whole ending was kind of a mess in that respect. I'm still not sure what the director was going for and I'm positive that viewers that haven't read the books have no idea what's going on.

I also wish the movie spent more time developing the relationships between Jace, Alec and Isabelle. They barely interact in the few scenes they are in. You can't tell that Alec and Isabelle are siblings and there is no mention of Alec and Jace being parabatai. Even if they did it wouldn't have mattered because they exchange about three sentences and don't act like best friends at all. I was very disappointed in that. Also, the actors who play Alec and Isabelle look way too old. I'm guessing that they are supposed to be older than teenagers (which is how they are in the book) but they looked about 30!

The movie was fun, especially seeing one of my favorite books come to life on the screen. However, there are some major flaws that prevent me from loving it. I will probably see the next movies if they make them but my expectations won't be that high.

Great review, and thanks for sharing your thoughts! We actually haven't read the books, so it sounds like the movie might be more enjoyable for us in that regard. But potentially a bit confusing too... Oh well! We'll probably see it at some point. :)