Confessions of a Triple Shot Betty by Jody Gehrman 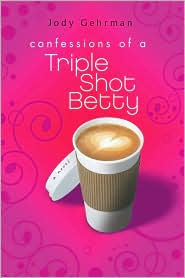 Geena can't wait for summer: she's working at a cute coffee shop called The Triple Shot Betty and her cousin is coming home from boarding school. Geena is positive that her cousin Hero and best friend Amber will hit if off immediately; but when they don't become instant friends, Geena isn't sure what to do. Trying to reconcile her two friends and work with them at the same time may seem hard, but Geena is up for the challenge. But things get complicated (as always), when boys come into the picture: there's tension between Geena and Ben, Hero is in love with Claudio and John, who is used to getting what he wants, wants Hero. This crazy love triangle causes some problems, but it's nothing the Triple Shot Bettys can't handle.
This book was so cute! I love books that take place during the summer (my favorite season) because the weather is perfect for all kinds of adventures, plus the endless days provide the opportunity for interesting things to happen. And that they did. Geena is the classic girl-next-door, albeit a skater girl-next-door, which was something new. And she was nicely complemented by her soft cousin Hero and outgoing friend Amber. Though at times the animosity between Amber and Hero was annoying and unwarranted, it created the needed tension that made this novel good. Confessions of a Triple Shot Betty was loosely based on a play by Shakespeare, Much Ado About Nothing. Even though I haven't read Much Ado About Nothing, I could still see the Shakespearan themes coming through (mainly regarding the archetypal villains). John, the villain, had all the characteristics of a bad guy: charming (like the creepy charming), calculating, cunning, and at times just plain evil. I liked this new spin on an old story and think it's the perfect read for someone wanting to sit down and relax with a book.
8 out of 10.
Posted by Simply_Megan at 9:02 PM

I really want to read this book!!!