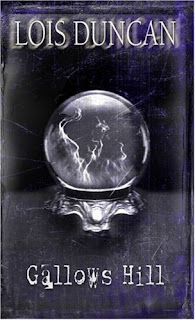 Sarah can see people's secrets in an ordinary crystal paperweight. Too bad they still believe in witches in Pine Crest. And they don't like them at all. Sarah is about to relive a horrible ordeal that happened hundreds of years ago--unless she can undo a terrible wrong.

I usually write the summary myself, but I thought the summary on the back sounded so mysterious and spooky. Don't worry, though, I'll give my own summary, too:
Sarah has just (unwillingly) moved to Pine Crest, Missouri, with her lovesick mother who is following her new boyfriend. Never mind that Ted is still legally married, Sarah's mother has been swept off her feet by this overbearing and contemptuous man. Obviously, Sarah and her mother are not welcomed with open arms into this tight-knit, and extremely conservative, community. So Sarah agrees to read fortunes at a Halloween carnival to make some friends, and she begins to see things in crystal paperweight her mother gave her. Things that come true. When Sarah starts a fortune telling business with two kids from school, people start to believe she's a witch. And that could have deadly consequences in a town like Pine Crest.

If you like thrillers and supernatural type books, you definitely have to read Lois Duncan. Most people have never heard of her, but she wrote the book I Know What You Did Last Summer, which was later turned into a movie. (By the way, the book is a lot better. Just saying.) Her books are like Goosebumps for teens, but instead of vampires and mummies, she uses themes like reincarnation and immortality. So her books are really good. And Gallows Hill was no exception. It was so suspenseful, I didn't want to stop reading. The book was a lot like the Salem Witch Trials, where everyone started accusing people of being witches for riduculous reasons. But I don't want to give anything away, so you'll just have to read it to find out what happens.
8 out of 10.
Posted by Simply_Megan at 1:24 PM

Oooh I love Lois Duncan, but haven't read this one yet. It sounds spooky and fun!

I have a younger sister who read The Witch of Blackbird Pond and I'm thinking this sounds totally up her alley. Her to-read-list is almost longer than mine!