Death By Denim by Linda Gerber 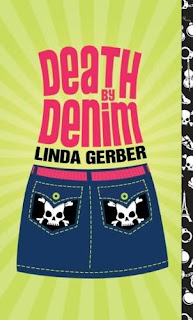 Aphra and her mom have been hiding out in France, biding their time until The Mole's minions decide to come after them again. And after three months in Lyon, someone has discovered them. On the run again, Aphra and her mom put their trust into the CIA to help them escape. But when their contact is found dead in the Seine River, the two realize that The Mole means business. Against the wishes of her mother, Aphra travels to Italy as bait to flush out The Mole, and hopefully have him captured. But, as usual, things do not go according to plan, and Aphra must use her stealth and cunning to save the day.

I think this trilogy is perfect for anyone who likes mystery or action novels. The same plot spans over three novels, but we get a whole new array of locations and characters in each book. It's also somewhat of a spy novel, since Aphra's mom works for the CIA, so any fans of The Bourne books/movies will really enjoy these books. That being said, I like the originality that comes with this mystery/action/spy novel, since it encompasses a whole slew of genres. Aphra is still her spunky self, and we get to see love interest Seth again. The relationship between Aphra and Seth is almost a Romeo and Juliet one, because the two want to be together but can't due to circumstances beyond their control. The sentence structure thing that annoyed me in Death By Latte is gone (thank goodness!) but I still felt like this book could be a lot longer. Maybe it's just me wanting to read more of Aphra kicking the bad guys' butts. Anyway, I thought the ending was perfect. It tied up the loose ends, but the epilogue leaves room for the reader's imagination. I really hope that Linda Gerber continues to write about Aphra and company, because I don't know if I will be able to find more mystery/action/spy books that can compare.

so all 3 books r available? schweet!