The Disreputable History of Frankie Landau-Banks by E. Lockhart 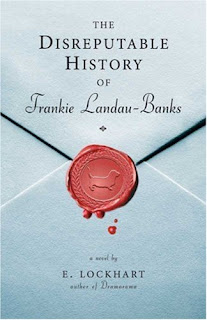 Frankie Landau-Banks attends Alabaster Prep, a prestigious boarding school in New England. When she was a freshmen, Frankie was a slightly dorky girl who looked to her older sister for guidance and support. Now that her sister has graduated and Frankie has taken on a more womanly figure, she is able to find her own place at Alabaster. This includes dating popular senior Matthew Livingston and getting to know all his friends. But when she discovers that Matthew is a member of a secret, all male society, Frankie is more than annoyed. Taking matters into her own hands, Frankie attempts to show the school that girls can be as smart and strong as boys.

Surprisingly, I really enjoyed this book. It's surprising because I didn't really like The Boyfriend List, also written by E. Lockhart. But this book was completely different. It didn't even seem like it was by the same author. Which was a good thing because I didn't really like the tone of the other book. Frankie was just such an interesting character. She was a feminist, or had feminist tendencies (see below for more info) and I really liked her spunk. There was also a lot of cool information about secret societies that I thought were really interesting. As I was reading, I noticed that there were some common themes/trends that I wanted to discuss. So below is a (possibly boring) literary analysis of some things that interested me. If yiou want to bypass this part, just skip to the end.

1) Feminism
It took me awhile to see the strong feminist undercurrents of this novel. Frankie is definitely a feminist, or at least an undeclared feminist. She frequently calls friends and family members out on double standards (at one point she was mad that her mom wouldn't let her take a walk by herself when they were on vacation, but would let her male cousins do so). Frankie is constantly thinking that Matthew and his senior friends look down on her because she is a girl and two years younger than them. Sometimes Frankie was correct in her thoughts, other times I felt she was reading into everything too much. But when she finds out that Matthew is in an all-male secret society and hasn't told her about it, she gets really annoyed.

2) Power Plays
The people in this book do a lot of things to gain control in different situations. And a lot of the things they would do I have never seen before. One thing a lot of the characters did was pretend certain events or conversations never happened. I just thought this was so weird. Frankie would go up to an acquaintance and remind them of something that happened the year before, and then that person would completely deny it. They would lie even though Frankie and that person both knew it was true. Frankie recognizes that this is a way for someone to have an upper hand in a situation, but it was so foreign to me.

3) Marking Territory
Another power play I witnessed a lot was the characters "marking their territory" on their friends or signficant others. Frankie saw this a lot with her boyfriend and his best friend Alpha. Alpha would call Matthew when he knew he was with Frankie and ask him to do something. Matthew would say yes, and it was made clear to Frankie that Alpha was "marking his territory." This was another thing I've never seen before and thought it was an interesting reaction when you think your relationship with someone might be insecure.

So those themes I thought were either important to the overall story (feminism) or just interesting to me on a personal level (points 2 and 3). Since most of my analysis dealt with character interaction, I thought The Disreputable History was especially unique in how the characters related to one another. I don't know if it was because all the kids were from rich families attending a competitive boarding school, but it was definitely something I had never seen before. Overall, I thoroughly enjoyed The Disreputable History and this reading has inspired me to check out more of E. Lockhart's works.

I really liked this book too. Great review!!

I have been meaning to read this book for so long but I just haven't had time yet. Great review! I might just have to get it this weekend.