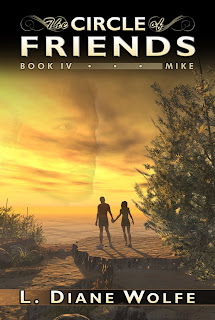 Mike Taylor is the epitome of stability. His family is proud of his academic and athletic achievements at Georgia Tech, and despite the temptations of college life, he has maintained his moral standards. Yet beneath the peaceful surface, Mike is consumed with guilt, fearing condemnation and rejection. A former girlfriend's abortion and the intense love he feels for his roommate's wife constantly remind Mike of his failures. Unable to forget and full of shame, he refuses to forgive himself. When Danielle enters his life, he realizes he can no longer hide the past. Will she be able to reach him or is Mike past the point of redemption? (Taken from back cover)

The Circle of Friends was different than books I have previously read. It's categorized as young adult fiction, but the main character Mike is graduating from college at the beginning of the book, so he is technically an adult. It's one of those books that kind of overlaps genres and can appeal to different ages.
Mike was an okay protagonist. I liked that he wasn't perfect and still had flaws like any normal person. What I didn't like was the hopelessness that surrounded him as a character. As stated in the book synopsis, Mike is unable to forgive himself for a past girlfriend's abortion. Abortions are big deals, but I felt that Mike dwelt too much on it and it started to get annoying. However when another girl enters his life, he grows as a person and begins to feel better about himself. Speaking of Danielle, she was a character I really liked. She was a vibrant person and was just really outgoing. She brought Mike out of his shell, and helped him to forgive himself. I liked that the book had a hopeful ending and I think fans of the previous Circle of Friends books will enjoy this new addition to the series.
Release Date: October 6, 2009
Posted by Simply_Megan at 9:19 PM

What an interesting review!

Having read two of the COF books, I agree that they definitely surpass the YA genre.

I'm so looking forward to this next book in the series!

Gerat review! I can understand how Mike's character would seem to be too focused on the abortion in his past, but I can tell you from watching a friend deal with it, men are deeply affected and hold on to it, even wallow in it for a long time and because they are supposed to be strong and uneffected, they tend to have a harder time dealing with it and it affects many aspects of their lives even years later. Kudos, Diane for tackling the subject!

Shame is difficult for a character to confront and overcome. Makes for terrific character buildup and the opportunity to be an overcomer. Best wishes for your success Diane.

Thank you, Chris. Ironically, Gary Chapman's "Five Love Languages of Apology" had a real-life scenario exactly like Mike's situation (my story was first though!) and the young man was SO devastated. Guilt is one thing - spiritual guilt is ten times heavier to bear.

And thank you, Stephen. I think my character's issues get heavier with each book, too.