The Lighter Side of Life and Death by C.K. Kelly Martin 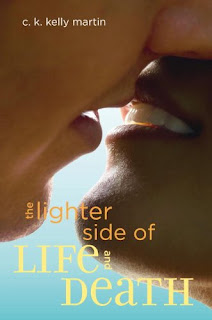 Acclaimed YA author C. K. Kelly Martin offers a sexy, soulful story of one confused boy, two girls, and all the complications that ensue in this romantic feel-good love story that celebrates friendship, first love, first lust, and second chances.

Sixteen-year-old Mason Rice is having the night of his life. He's just delivered an incredible performance in the school play, basked in celebratory afterglow vibes at the party of the year, and lost his virginity to one of his best friends—the gorgeous but previously unobtainable Kat Medina. His dreams are coming true, and the future looks golden.

Unfortunately, Kat sees things very differently. Crossing the friendship line was a big mistake, and all she wants is to forget it and move on, even if that means forgetting Mason altogether. What's a guy to do? Well, if you're Mason, you hang your hopes on the first attractive twenty-three-year-old you cross paths with. At first Mason wonders if he's imagining the chemistry . . . until Colette invites him over to her apartment. Suddenly Mason's living in a whole new world. (From GoodReads)

This is my first C.K. Kelly Martin novel and I loved it! It was just such a well-written story with a good premise...how could you not like it? One of my favorite parts of TLSoLaD (the title is entirely too long for me to type out) is that it was written from a boy's point-of-view. Sometimes I shy away from these books because I just like reading about girls better, but if it's done well (John Green, anyone?), reading about a boy ends up being more interesting. So it had that going for it. I also liked the family dynamics becaues in the story Mason's dad gets remarried and his new wife and her two kids move in. There's a six year old boy and then an extremely moody thirteen-year-old girl who Mason has some pretty intense fights with. But it's what you would expect to happen with step-siblings. I liked that it wasn't all Brady Bunch perfect.
One of the things I had a problem with...well,not necessarily a problem but I was expecting to turn out different was the drama with Kat. I thought that was going to be a major part of the book and it was, but when Mason starts having an affair with Colette the other drama is pushed into the background. So much that I forget it's even there and that it's kind of feuling this whole affair with Colette. Speaking of Colette, she was an interesting character. Interesting in that I had no opinion on her. I was completely neutral and it felt like there was some distance between her and the reader. Now, I don't know if this was done purposefully or just a side effect but I just felt kind of blah about her.
Other notes: this book takes place in Canada, which I think is AWESOME. I honestly think this is the first book that I've read that takes place in Canada. It wasn't drastically different or anything, but you'd see some small differences and that made the book really cool. Also, I love the title but didn't really see how it fit with the book. The book isn't that light (Mason's feelings towards both Kat and Colette are pretty serious) and the 'life and death' part was kind of irrelevant. The whole time I was waiting for someone to die, which would have been really out of place, but the title made me think someone would. I'd love to hear some other opinions though.
Regardless, I thought The Lighter Side of Life and Death was extremely well-written, funny and serious at the same time, and just an all around amazing novel.
8 out of 10.
FTC: I received this book from Random Buzzers.
Posted by Simply_Megan at 1:09 PM

C.K. Kelly Martin is awesome. I really recommend all of her novels especially I Know It's Over.