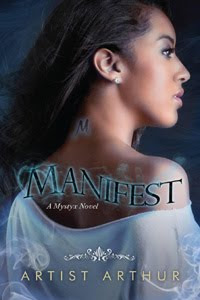 When fifteen-year-old Krystal Bentley moves to Lincoln, Connecticut, her mom's hometown, she assumes her biggest drama will be adjusting to the burbs after living in New York City.

But Lincoln is nothing like Krystal imagined. The weirdness begins when Ricky Watson starts confiding in her. He's cute, funny, a good listener - and everything she'd ever want - except that he was killed nearly a year ago. Krystal's ghost-whispering talents soon lead other "freaks" to her door - Sasha, a rich girl who can literally disappear, and Jake, who moves objects with his mind. All three share a distinctive birthmark in the shape of an M and, fittingly, call themselves the Mystyx. They set out to learn what really happened to Ricky, only to realize that they aren't the only ones with mysterious powers. But if Krystal succeeds in finding out the truth about Ricky's death, will she lose him for good? (Taken from back cover)
I had so many problems with Manifest. I thought that this book was all over the place. Reading the back cover there sounds like there will be a solid narrative and a clean-cut plot. Unfortunately, the summary is a bit misleading. First off, I was expecting some big romance with Krystal and the ghost, Ricky. But there was none. Actually there was a lot of Krystal being jealous of Ricky's dead ex-girlfriend who was also a ghost. And she occasionally got butterflies in her stomach when she thought of him. But they hardly even talked. Half-way through the book I forgot he was a character.
Second, there's this subplot with creepy pornographic pictures and the hint of a rapist lurking around. The subplot actually turns out to be a major plot point important to the story, but I felt like it was just thrown in there for fun. There was some foreshadowing because Krystal starts getting IMs and texts from the creepy rapist, but there is absolutely no foreshadowing towards the actual culprit. It was like the author picked a minor minor character she had mentioned once before and said "Here, he's the bad guy!"
Those were the two things I had big problems, but throughout the book other little things annoyed me. The sub-plot of why Krystal mom divorced her dad was really weird, and at one point Krystal breaks a window because all these ghosts are attacking her, but she has to tell her mom and step-dad that she was having a nightmare. That doesn't sound that far-fetched, right? However, they admit her to the hospital for observation. I thought that was very extreme. It's definitely a problem if your nightmares are bad enough that you break a window, but she wasn't harming herself. I don't even know if the hospital would even admit you. There were just a lot of things like that made me do a double take because it was so bizarre.
The only part I liked was the development of Krystal's character. She's extremely whiny in the beginning, especially towards her mom and step-dad but by the end she has accepted the fact that her parents are divorced and tries to be a little more civil. But still, Manifest was poorly executed.
4 out of 10.
Release Date: Today!
FTC: This book was provided to me by the publisher.
Posted by Simply_Megan at 11:27 PM