The Queen's Daughter by Susan Coventry 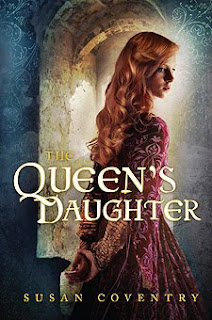 Joan's mother, Queen Eleanor of Aquitaine, is the most beautiful woman in the world. Her father is Henry II, the king of England and a renowned military leader. Joan loves them both - so what is she to do when she's forced to choose between them. As her parents' arguments grow ever more vicious, Joan begins to feel like a political pawn.

When her parents marry her off to the king of Sicily, Joan finds herself stuck with a man ten years her senior. She doesn't love her husband, and she can't quite forget her childhood crush, the handsome Lord Raymond.

As Joan grows up, she begins to understand that her parents' worldview is warped by their political ambitions, and that hers, in turn, has been warped by theirs. Is it too late to figure out whom to trust? And, more important, whom to love?
This is going to be an extremely short review because I did not The Queen's Daughter at all. I don't really have much to say except that it was sooooo boring. It read like a bland history textbook and I like history. So I'm guessing this is a problem. The one fault with The Queen's Daughter is that the first 150 pages takes place with Joan as a seven year old. And what was totally annoying is that she talked and acted like an adult. It was so bizarre. I don't care how mature you are, at age 7 you do not have complex thought processes. There was supposed to be all this royal intrigue and mystery but it was just ... boring! Oh my goodness, I hate using that word but I was not interested at all at what was happening. From the summary, you can see that the character of Lord Raymond sounds kind of important. I pretty much assumed that they would get together so I literally skipped all the book until I saw scenes with them. The parts with them were cute so that was fine. But the rest of the book was a fail. It's kind of hard for me to even comment on it because I didn't even really read it but what I trudged through was not enjoyable. I feel kind of bad that I just trashed The Queen's Daughter but I can't recommend it to anyone after falling asleep while reading it.
3 out of 10.
FTC: I received this book from the Henry Holt InGroup.
Posted by Simply_Megan at 9:45 PM