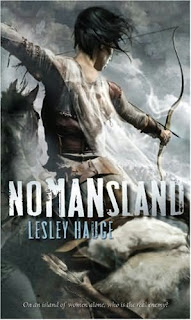 Sometime in the future, after wars and fires have devastated the earth, a lonely, windswept island in the north is populated solely by women. The women have survived against all odds by working hard in their fields. Their lives are tough.

Among these women is a group of teenage Trackers - expert equestrians and archers - who are in training to protect their shores from the enemy. The enemy, they've been told, is men.
When these girls come upon a partially bured home from the distant past, they are fascinated by the strange objects - high-heeled shoes, teen magazines, makeup - found there. What are they to make of these mysterious things, which introduce a world they have never known? And what does it mean for their strict society where friendship is forbidden and rules must be obeyed - at all costs. (Taken from inside flap)
I was really excited to read Nomansland. It was dystopian and it seemed kind of like a feminist novel. I mean, it's set in world where there's only women and men are the enemy. Nomansland had a very interesting premise to say the least. Unfortunately, the book didn't live up to my expectations as much as I hoped it would. Even though it's written in first person, everything felt distant. It might be because the society in the novel discourages frienship, emotions, feelings, etc. So everything was pretty much emotionless coming from our narrator, Keller. I also didn't like the pacing of the story; it was too slow most the time, but it did speed up at the end. It also probably didn't help that I read Nomansland in two chunks, so it made the read a little choppy for me. However, I did love that the girls found a buried house from the past filled with stuff that is probably in my bedroom right now. It was so interesting watching their reactions to lipstick, high-heels, and magazines. It gives the reader a different perspective and an outsider view of what we consider normal. It's extremely enlightening. Besides a few grievances with Nomansland, it was a pretty good novel and an interesting take on the dystopian genre. I would recommend it to fans of science fiction or anyone who is interested in feminism.
7 out of 10.
FTC: I received this book through the Henry Holt InGroup review program.
Posted by Simply_Megan at 11:05 PM