A Clash of Kings by George R.R. Martin 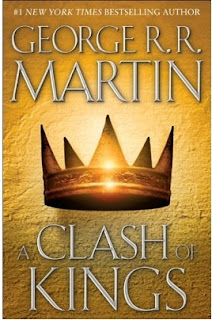 Summary:
A comet the color of blood and flame cuts across the sky. Two great leaders—Lord Eddard Stark and Robert Baratheon—who hold sway over an age of enforced peace are dead, victims of royal treachery. Now, from the ancient citadel of Dragonstone to the forbidding shores of Winterfell, chaos reigns. Six factions struggle for control of a divided land and the Iron Throne of the Seven Kingdoms, preparing to stake their claims through tempest, turmoil, and war. It is a tale in which brother plots against brother and the dead rise to walk in the night. Here a princess masquerades as an orphan boy; a knight of the mind prepares a poison for a treacherous sorceress; and wild men descend from the Mountains of the Moon to ravage the countryside. Against a backdrop of incest and fratricide, alchemy and murder, victory may go to the men and women possessed of the coldest steel...and the coldest hearts. For when kings clash, the whole land trembles. (from GoodReads)

Review:
This book almost took me an entire month to read! That is crazy. I'm normally a fast reader, but the combination of a ton of schoolwork, a long book, and prose that is difficult to read through made this a very long journey. I did like A Clash of Kings but there are definitely things I have problems with.

Now that I'm familiar with the story and characters, it is easier to enjoy this series. I've always been interested in political intrigue and kings and courts and all that stuff so this is definitely right up my alley. The book changes point-of-view between about eight characters and each one has a pretty compelling story to tell. There are some characters I like better than others (Tyrion, for one) but I don't dislike any of them. Even the ones who are "bad", like Tyrion, I still enjoy reading about them. That's a pretty big accomplishment, in my book.

What I didn't like about A Clash of Kings is the same thing I didn't like about its predecessor, A Game of Thrones. The book is too long! There is so much description and unnecessary narration that these books could be so much shorter. And this is not a book that I would say is a quick read. It feels like it takes me five minutes to read one page and I would rather be able to rush through the pages because I'm so enthralled with the book. I like the story but the way it's written just makes it hard to read quickly. It's pretty annoying.

I don't want to talk about the plot too much because it's the second book but it's the same pacing, tone, and storyline as the first novel.

Overall, I like this series, but don't love it, which is unfortunate. On the next (and longer) novel! Hopefully I can read this one a little faster.