The Madman's Daughter by Megan Shepherd 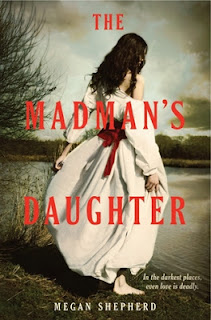 Summary:In the darkest places, even love is deadly.

Sixteen-year-old Juliet Moreau has built a life for herself in London—working as a maid, attending church on Sundays, and trying not to think about the scandal that ruined her life. After all, no one ever proved the rumors about her father's gruesome experiments. But when she learns he is alive and continuing his work on a remote tropical island, she is determined to find out if the accusations are true.

Accompanied by her father's handsome young assistant, Montgomery, and an enigmatic castaway, Edward—both of whom she is deeply drawn to—Juliet travels to the island, only to discover the depths of her father's madness: He has experimented on animals so that they resemble, speak, and behave as humans. And worse, one of the creatures has turned violent and is killing the island's inhabitants. Torn between horror and scientific curiosity, Juliet knows she must end her father's dangerous experiments and escape her jungle prison before it's too late. Yet as the island falls into chaos, she discovers the extent of her father's genius—and madness—in her own blood.

Inspired by H. G. Wells's classic The Island of Dr. Moreau, The Madman's Daughter is a dark and breathless Gothic thriller about the secrets we'll do anything to know and the truths we'll go to any lengths to protect. (from GoodReads)

Review:
I just finished The Madman's Daughter about an hour ago and it was definitely one of the best books I've read in a long time! I've been in bit of reading funk but I'm happy to say that this book brought me out of it. This book isn't without its flaws but in my opinion the good outweighs the bad.

I've never read The Island of Dr. Moreau but now I really want to because I enjoyed this novel so much. I'd love to see where the author got her inspiration and see how that story pans out. I'm also excited that The Madman's Daughter is the first book of a trilogy. The ending was very unexpected so I'm glad we get to revisit the characters and story.

As soon as I began reading The Madman's Daughter I liked Juliet instantly. She's smart, hardworking and resourceful. What I liked even more is that she's not all butteflies and candy - there's a darkness inside her which made her a very interesting and complex character. It's an issue Juliet struggles with throughout the novel, if she's going to be as crazy as her father. When this novel is branded as a "Gothic thriller" they weren't joking. There is some gruesome stuff in here: animal vivisection, surgery, Frankenstein-esque medical procedures, murder, unethical experiments. Luckily I enjoyed the creepiness and the author created a very Gothic atmosphere. It was so interesting reading about the human-animal hybrids that Dr. Moreau created - the science was a little sketchy so I just suspended my disbelief. I wish there were pictures or something because it was hard to imagine what some of these creatures looked like.

A big part of the novel was the love triangle between Juliet, Montgomery (her father's assistant and her best friend before the scandal) and Edward (a runaway they meet on the ship). I loved the relationship between Juliet and Montgomery because they had a lot of history from before the novel is set. I could see the connection and enjoyed the scenes between  the two. Unfortunately the author tried to force a love triangle with Edward which didn't work. He's a superfluous character to begin with (except for the twist at the end) and I just wish he was in the story without being a romantic interest. Especially when it's obvious that most of Juliet's feelings lie with Montgomery.

There are multiple twists at the end of the story and I'm just glad that there are more books in this series. I didn't like how the book ended so I can't wait to see what happens next. The Madman's Daughter is an exciting, atmospheric and creepy novel, which might not be for everyone. But if you enjoy Gothic horror, I recommend checking this out.

Ooo, getting someone out of a reading funk is always high praise indeed. :)

Agree about Edward-I found the love triangle so frustrating when it was obvious she liked Montgomery more (and for longer). He could have been just a platonic friend and the story still would have worked.