An Atheist in the FOXhole: A Liberal's Eight Year Odyssey Inside the Heart of the Right-Wing Media by Joe Muto 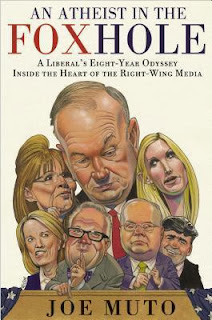 Summary:
The "Fox Mole" - whose dispatches for Gawker made headlines in Businessweek, The Hollywood Reporter, and even on The New York Times website—delivers a funny, opinionated memoir of his eight years at the Fox News Channel working as an associate producer for Bill O'Reilly.

Imagine needing to hide your true beliefs just to keep a job you hated. Now imagine your job was producing the biggest show on the biggest cable news channel in America, and you’ll get a sense of what life was like for Joe Muto. As a self-professed bleeding-heart, godless liberal, Joe’s viewpoints clearly didn’t mesh with his employer—especially his direct supervisor, Bill O’Reilly.

So he did what any ambitious, career-driven person would do. He destroyed his career, spectacularly. He became Gawker’s so-called Fox Mole.

Joe’s posts on Gawker garnered more than 2.5 million hits in one week. He released footage and information that Fox News never wanted exposed, including some extremely unflattering footage of Mitt Romney. The dragnet closed around him quickly—he was fired within thirty-six hours—so his best material never made it online. Unfortunate for his career as the Fox Mole, but a treasure trove for book readers.

An Atheist in the FOXhole has everything that liberals and Fox haters could desire: details about how Fox’s right-wing ideology is promoted throughout the channel; why specific angles and personalities are the only ones broadcasted; the bizarre stories Fox anchors actually believed (and passed on to the public); and tales of behind-the-scenes mayhem and mistakes, all part of reporting Fox’s version of the news. (from GoodReads)

Review:
I followed the Fox mole story on Gawker over a year ago and I've been waiting ever since for this book to be published. I always wondered what it would be like to work for an organization whose values are not your own - and now I get a firsthand account. I was surprised that much of the book isn't ideological, but rather stories on how a television empire is produced.

I firmly believe that anyone can enjoy An Atheist in a FOXhole, regardless of your political beliefs. The book is more about our intrepid storyteller's life mixed with anecdotes and explanations of how Fox works. I was fascinated by how a television channel is run and what makes Fox different. It's definitely a team effort and since TV is so fast-paced, the work is often done seconds before it's aired live. The most interesting thing was that Fox used videotapes for everything up until a few years ago. For an organization that makes so much money you'd think they would have top of the line equipment.

I still think it's so crazy that Joe Muto worked for Bill O'Reilly - whether you like him or not, The O'Reilly Factor is the number one cable news show. That's pretty cool that our author was one of the people who pitched ideas and stories to O'Reilly and directly influenced what was on his show each  night.

You can tell that Joe Muto has some writing experience, especially since he's able to weave together the narration of the past and "present day," which is when he was caught at the mole. Some of his writing is a little over-the-top but I was still surprised that he was able to remember so many stories and encounters while working at Fox.

Honestly, if you're interested in tv or film and want to know how the inside is run, you should definitely check out this book. It's so fascinating and you get a pretty great story on top of it.

Rating: 8 out of 10.
FTC: borrowed from the library