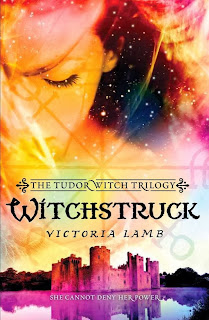 Summary:
If she sink, she be no witch and shall be drowned. If she float, she be a witch and must be hanged.

Meg Lytton has always known she is different; that she bears a dark and powerful gift. But in 1554 England, in service at Woodstock Palace to the banished Tudor princess Elizabeth, it has never been more dangerous to practice witchcraft. Meg knows she must guard her secret carefully from the many suspicious eyes watching over the princess and her companions. One wrong move could mean her life, and the life of Elizabeth, rightful heir to the English throne. With witchfinder Marcus Dent determined to have Meg's hand in marriage, and Meg's own family conspiring against the English queen, there isn't a single person Meg can trust. Certainly not the enigmatic young Spanish priest Alejandro de Castillo, despite her undeniable feelings. But when all the world turns against her, Meg must open her heart to a dangerous choice. The Secret Circle meets The Other Boleyn Girl in Witchstruck, the first book of the magical Tudor Witch trilogy. (From GoodReads)

Review:
I am obsessed with the Tudors and will pretty much read anything I can get my hands on if it's about this famous family. Sometimes what I read isn't that great, but luckily I really enjoyed Witchstruck!

What's fun about Witchstruck is that it isn't just plain historical fiction. Meg is a witch, so there's fantastical elements too, which made the story more interesting. I liked the twist on the original story. Meg tries to use her powers to help Elizabeth because she wants to see her on the throne. Since witchcraft is illegal there's the added suspense if Meg is going to be caught and what will happen afterwards.

My favorite part of the novel was Meg's relationship with the soon-to-be Spanish priest Alejandro. Their relationship was a tad unrealistic but the forbidden nature of it made it hard to resist. Not only is Alejandro about to be a priest there's also another secret preventing him from getting too close to Meg. I'm curious to see how these two beat the odds in order to pursue a relationship. Unfortunately the odds aren't in their favor.

Even though I had a lot of fun reading Witchstruck, it had its flaws too. Meg was a little too careless using her magic and there were many times that she was almost caught. She should have had more discretion. The characters, including Elizabeth, Alejandro and Meg could have been developed more and that goes the same for Meg and Alejandro's relationship.

Overall I am looking forward to the next book in the trilogy! It's an exciting story and I want to find out what evil is lurking and if Elizabeth will ever get to be queen (though I think we know how that turns out).

Rating: 8 out of 10.
FTC: received copy from author