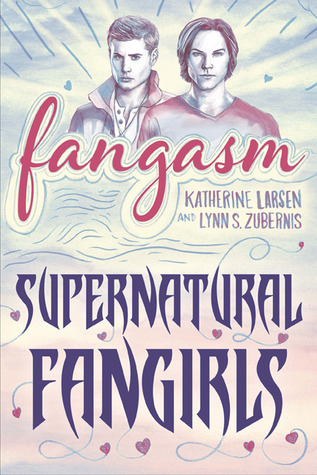 Summary:
Once upon a time not long ago, two responsible college professors, Lynn the psychologist and Kathy the literary scholar, fell in love with the television show Supernatural and turned their oh-so-practical lives upside down. Plunging headlong into the hidden realms of fandom, they scoured the Internet for pictures of stars Jensen Ackles and Jared Padalecki and secretly penned racy fan fiction. And then they hit the road—crisscrossing the country, racking up frequent flyer miles with alarming ease, standing in convention lines at 4 A.M.

They had white-knuckled encounters with overly zealous security guards one year and smiling invitations to the Supernatural set the next. Actors stripping in their trailers, fangirls sneaking onto film sets; drunken confessions, squeals of joy, tears of despair; wallets emptied and responsibilities left behind; intrigue and ecstasy and crushing disappointment—it’s all here.

And yet even as they reveled in their fandom, the authors were asking themselves whether it’s okay to be a fan, especially for grown women with careers and kids. “Crazystalkerchicks”—that’s what they heard from Supernatural crew members, security guards, airport immigration officials, even sometimes their fellow fans. But what Kathy and Lynn found was that most fans were very much like themselves: smart, capable women looking for something of their own that engages their brains and their libidos.

Fangasm pulls back the curtain on the secret worlds of fans and famous alike, revealing Supernatural behind the scenes and discovering just how much the cast and crew know about what the fans are up to. Anyone who’s been tempted to throw off the constraints of respectability and indulge a secret passion—or hit the road with a best friend—will want to come along. (from GoodReads)

Review:
So I am a big fan of Supernatural and the fact that the authors decided to analyze what it means to be a fan in the context of this TV show is what really drew me into this book. I loved that the authors are self-proclaimed fangirls and it was cool to see two intelligent, professional women love a TV show as much as I do. I could really relate to their experiences of watching the show, encountering the huge online community and being captivated by the two leads, Jared Padalecki and Jensen Ackles.

What made this book such a fun read was that the story was divided between some psychological analysis and the authors' fan experience. They travelled to a ton of Supernatural conventions, got to visit the set and interview everyone from the creator of the show to the lead actors themselves. I was super jealous but I loved that I was living vicariously through them.

Some parts were repetitive; they told a few stories more than once. I wasn't always clear on what their findings were but it turns out that they published a more academic book on this topic. Now I'm compelled to check that out too!

Though this book is about fandoms in general, it might not make much sense if you haven't watched Supernatural and are unaware of the fandom lingo that's present online. So I probably would only recommend this book to fans of the show. I'm sure there are some of you out there!