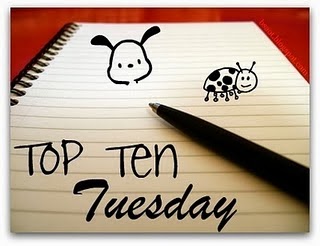 Top Ten Books That Will Make You Swoon

1. The Angelfire Trilogy by Courtney Allison Moulton
This book series features one of my favorite all time romances: Ellie and Will! What I love so much is that their relationship is very well-developed and we're actually shown (instead of being told) how much they adore each other.

2. The Season by Sarah MacLean
The Victorian period is ripe for swooning - pretty dresses, tailored suits and fancy balls are some of the hallmarks of the era.

3. The Dead-Tossed Waves by Carrie Ryan
Not a book you would normally consider swoon-worthy (because it features zombies) but I really enjoyed the relationship between Gabry and Elias amidst the chaos.

4. Perfect You by Elizabeth Scott
I read this book so long ago but it still sticks with me! Kate can't exactly figure out what's going on between her and Will, but you'll be pleasantly surprised by the end.

5. The Gemma Doyle Trilogy by Libba Bray
The romance isn't a huge part of these novels, but that actually makes it better. The few times Kartik appears on page (at least in the first two novels) were such treats that I looked forward to reading.

6. The Infernal Devices by Cassandra Clare
There's a love triangle between Jem, Will and Tessa, but it's not contrived in the least. Both boys are great matches for Tessa and their feelings for each other are very complicated.

7. Gone With the Wind by Margaret Mitchell
Rhett Bulter may be a rogue, but he's such a great character to read about and definitely made Scarlett (and me) swoon.

8. Pride and Prejudice by Jane Austen
Same with Mr. Darcy!

9. Past Perfect by Leila Sales
I just love this novel. A feud between the Revolutionary War and Civil War reenactment sites? An elicit romance? It's perfect!

10. Glimmerglass by Jenna Black
I didn't like this book when I first read it but I actually enjoyed the love triangle. I still need to read the last book of the trilogy to find out what happens!
Posted by Simply_Megan at 9:51 AM