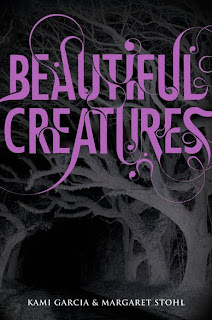 Ethan Wate lives in small town Gatlin, South Carolina, home to Confederate flags, home-cooking and Southern hospitality. Ethan wants to get out of the small-mindedness and narrow thinking that often comes along with a small town, but resigns himself to trying to fit in at his high school until he graduates. That is, until Lena Duchannes moves to town. Lena, niece of the resident shut-in, is beautiful, mysterious, and completely different than the other girls in Gatlin. There's something special about Lena, something almost magical. As Ethan is drawn to Lena, he must not only contend with the wrath of Gatlin, but the curse that is on Lena's family.

When I received Beautiful Creatures in the mail, I was so excited to read it. It's been one of those books that are really hyped up and it sounded really good. Unfortunately, Beautiful Creatures is not my new favorite book. I did like it somewhat, but there are some things I didn't like at all.
First, I thought Beautiful Creatures was way too long. It was over 600 pages and that would have been fine if that length was actually needed. In my opinion, the book could have been shortened significantly because there was a lot of unnecessary narration. The book is written in first person, so Ethan gets a lot of exposition and he just doesn't stop talking. I must have heard Ethan say that his housekeeper Amma is a tough, no-nonsense woman a million times before the authors were satisfied that the reader understood. In keeping with Ethan's run-away narration, there was a lot of telling, but not showing. I also think that the magical, Caster aspect of the story could have been fleshed out a little better.
Fortunately, Beautiful Creatures wasn't all bad. Around the 300 page mark, I started to get into the story a little bit more and was curious about what would happen at the end. It took awhile, but I got there eventually. Even though his "talking" annoyed me, I did like Ethan and thought that he was really funny. All the characters were unique and had distinguishable personality traits, which made the book somewhat enjoyable to read. I would also like to remind everyone that I'm not a huge fan of fantasy, which is why I may be reviewing this book unfavorably. So if you do like fantasy, you will most likely enjoy Beautiful Creatures. Just make sure you set aside some reading time because it will take you awhile.
7 out of 10.
Posted by Simply_Megan at 7:25 PM