The Espressologist by Kristina Springer 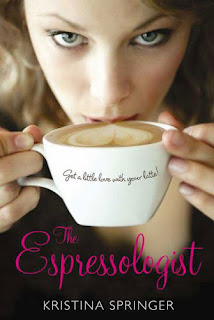 Jane’s job as a barista at Wired Joe’s Coffeehouse is a pretty boring gig. To make the workday go faster, she tests out her theory that you can tell a lot about a person based on their favorite coffee. After extensive research, Jane has a notebook full of personalities that go with each drink. So when she sees that some drinks seem to go along well with other drinks, based on their descriptions, Jane tries her hand at matchmaking two friends. When all goes well, Jane continues trying to find dates for other friends and the regulars at Wired Joe’s. But when the manager Derek discovers what Jane has been up to, he decides to make it an in-store promotion for the month of December. Jane will be the Espressologist every Friday night and match customers based on their drink preferences. Jane’s having fun and becoming semi-famous, so why is she feeling weird about her best friend Em dating her friend Cam, when she was the one who matched them?

I thought that The Espressologist was such a cute book. It was light, fun, humorous and romantic. I loved that Jane was a modern day matchmaker, and matching people based on their coffee preferences is a really smart idea. Who doesn't want a little love with their coffee? The book was short and interesting, so it read fast. The one thing I didn't like that much was that the author was very brief. Everytime something happened, the author could tell it in five sentences. She really took efficiency to a new extreme. It wasn't that big of a deal, but in my opinion it prevented The Espressologist from flowing as well as it could have. Despite that, I still think that The Espressologist was hilarious and a fun read for the holidays.
8 out of 10.
Posted by Simply_Megan at 11:50 AM

I am looking forward to reading this one, it sounds adorable! I love books that have something to do with a coffeehouse - I don't drink coffee but I always think that authors come up with such fun ideas that take place with a coffeehouse! Thanks for the review!