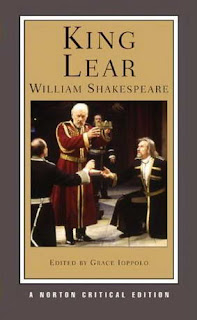 Lear is an old and aging king who is ready to give up his throne, and decides to split the kingdom between his three daughters: Goneril, Regan, and Cordelia. All the girls have to do to receive their inheritance is to profess their love of their father. Goneril and Regan have no problems lying about their love, but Cordelia, the only daughter who actually loves Lear, refuses. She is subsequently banished and Lear foolishly splits the country between Goneril and Regan. Along with some other manipulative characters, the two daughters start planning and scheming, and the country may very well end in ruin.

This is the fourth Shakespeare play I've read (along with Romeo and Juliet, Hamlet, and Twelfth Night) and compared to those I thought it was pretty good. It wasn't my favorite, but it was definitely enjoyable and not too bad of a read for being written in the early 1600s. There was a lot of intrigue and manipulation, which made the story interesting. There were a lot of different characters, some good and some pretty shady, and you never knew what was going to happen next. The ending was sad, but you have to remember that this was a tragedy. So if you have to read a Shakespeare play, this one wasn't too bad.
7 out of 10.
Posted by Simply_Megan at 12:39 PM

Not my favourite either but I really enjoyed this one too. :)