The Carrier of the Mark by Leigh Fallon 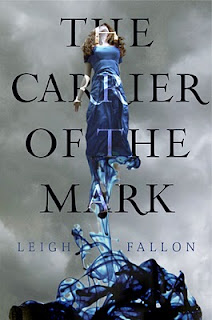 A move to Ireland is about to introduce Megan to her destiny, her real destiny, can she embrace it and will she survive it? A tragedy in Megan’s past set her on a predetermined course. A chain of events has been set in motion that brings Megan to Kinsale, a small town in the south of Ireland where her destiny awaits her. Her life starts to fall into place as she makes new friends and settles into her new school. However, the reclusive and distant Adam DeRís calls to her body and soul. She finds herself increasingly drawn to Adam and his strange family. Adam knows a secret from her past and he and his family hold the key to her future. A future that binds her to Adam and his world, a world of power, mystery and ancient orders. A world that unbeknownst to her, she very much belongs in. (from GoodReads)
Besides this sounding like a really good book with a beautiful cover, it also has a character with the same name as me and I'm Irish! It's perfect! (And, ironically, Megan is actually not an Irish name, it's Welsh). The Carrier of the Mark will be published on September 13, 2011.
Posted by Simply_Megan at 10:48 AM

Thank you so much for the WoW love! Woohoo!
Leigh

i really want to read this novel too. great pick :)

check out my WoW this week.

Sounds like a good one looking forward to a book set in Ireland.
Sally.
http://theelifylop.blogspot.com/2011/04/waiting-on-wednesday-14.html

I've seen this one on several wow picks today. I love the cover!

This book sounds so good! I'm so excited for it!