Book vs. Movie: Harry Potter and the Deathly Hallows: Part 2 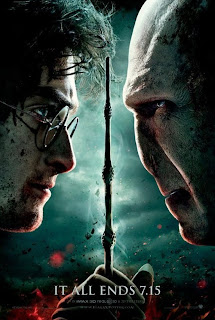 So Friday at Midnight (well actually it was closer to 12:30) I got to see the final installment of the Harry Potter movie franchise. I've been waiting since November to see the end and it was amazing. After some less than satisfactory movies (Order of the Phoenix, I'm looking at you) I am so glad that the last film was split in two so the fans could get the attention to detail the book deserved.

The Experience: I am so glad I went to see the midnight premiere. If you had asked me a month ago when we ordered the tickets I probably would have said let's just wait. The tickets were more expensive and going that late is a little annoying when you work mornings. But it was a ton of fun. We got the theater at about 10 pm and there were a TON of people. The cinema we went to has 16 theaters and most of them were being used. Everyone was dressed up as the characters. Once we were allowed in our theater, everyone was running around, shouting spells, etc. Some people even started dueling in the front, which was funny. But as soon as the movie started, it was so quiet you could hear a pin drop.

The Movie: I'll start off by saying I liked Part 1 better, but Part 2 was still awesome and absolutely wonderful. The whole movie is pretty much the Hogwarts battle, and the scene where Harry, Ron and Hermione sneak into Gringotts is in the beginning. Everything was just really well done. A lot of past characters returned so it was nice to see them again. Professor McGonagall was so cool, she had all the best lines. My favorite part was Snape's memories, and I think that's my favorite part in the whole series. Great job, Alan Rickman. The scene with the Resurrection Stone was so beautiful. I couldn't help but cry and so was everyone else in the theater. Luckily, if you've read the books you'll know how it ends but the Epilogue was hilarious in my opinion. They way they digitally aged the actors was pretty funny to me.

Ending Thoughts: I was riveted throughout the entire film and honestly cannot believe that my favorite book/movie series is actually over. I remember watching the first film on VHS in 2002 at my house. It's 10 years later and Harry Potter has been such a big part of the my childhood. I'll always cherish this series and continue to read the books and watch the movies. Okay, sentimentality over. But really, guys, this movie rocked, go see it!!!
Posted by Simply_Megan at 1:51 PM