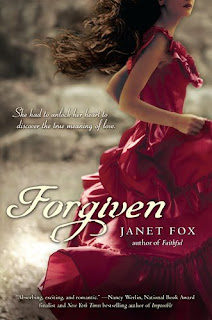 Summary:
Kula is the seventeen-year-old of Wild West outlaw Nat Baker. But when her father is accused of a crime he didn't commit, he sends Kula to San Francisco to find a secret box that will guarantee his freedom. In a city where Kula knows no one, she is not sure who to trust: Philippa Everts, the lady who she is living with; David Wong, the kind and well-mannered boy she meets; or handsome and devilish Will Henderson, whose family might know something about this mysterious box. But what Kula doesn't know is that all these people are inextricably tied to her family, and ultimately her future.

Review:
Unfortunately, I did not enjoy Forgiven. Aside from the setting in San Francisco and the mystery surrounding a box, I don't know if I would have continued to read Forgiven (and the fact that I had to review it).

My biggest problem with the novel was that it was boring. Though Kula is supposed to be on the search for a box, I felt like nothing really happens. The character that was supposed to be a villain didn't really feel like one. There were two love interests, David and Will. I didn't care for either as neither's character was fleshed out and developed enough. And then when David started to declare his undying love for Kula, after only a few encounters with the girl, I liked him even less.

Kula was actually an okay character, and it was funny to see the difference between her and Maggie (in Faithful). Maggie would do anything to be able to choose her husband and she wants someone she loves, but Kula only wants a man who can provide for her. I didn't hold Kula's views against her; if I had grown up in near-poverty, I would probably want the same thing too. But what really annoyed me about Kula is that she sometimes talked in third person. Lines like "Kula Baker doesn't take no for an answer" were sprinkled throughout Forgiven and I found them to be totally cheesy.

The box, and the mystery that is a part of it, was a bit anti-climatic, but I kept reading in hopes that there would be something interesting about it. I did enjoy reading about the city of San Francisco and naturally, the earthquake of 1906 plays a big part in the end. I love history so that was a redeeming point but overall, I did not like Forgiven.

Rating: 6 out of 10.
FTC: for Flamingnet Review Program