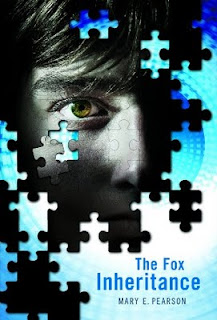 Summary:
Once there were three. Three friends who loved each other—Jenna, Locke, and Kara. And after a terrible accident destroyed their bodies, their three minds were kept alive, spinning in a digital netherworld. Even in that disembodied nightmare, they were still together. At least at first. When Jenna disappeared, Locke and Kara had to go on without her. Decades passed, and then centuries.

Two-hundred-and-sixty years later, they have been released at last. Given new, perfect bodies, Locke and Kara awaken to a world they know nothing about, where everyone they once knew and loved is long dead.

Everyone except Jenna Fox. (from GoodReads)

I really liked The Fox Inheritance, though as not as much as its prequel. I liked that it was narrated by Locke, who is mentioned in the first book. I thought the futuristic stuff was neat: robots are like humans and are used for jobs and even the United States has been separated into two countries. I thought it was really interesting and would like to learn more about this new world.

Like I said earlier, The Fox Inheritance is more action-packed. Most of the novel has Locke trying to get away from the scientist who gave him his body and at the same time trying to find Jenna. I did enjoy the fast past a lot, which made reading this book a lot of fun.

I think that The Fox Inheritance was a nice addition to the Jenna Fox series. Not as good as its predecessor, but still a decent read in its own right.

Rating: 8 out of 10.
FTC: received copy from publisher