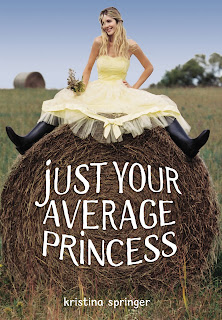 Summary:
Jamie Edwards has loved everything about growing up on a pumpkin patch, but ever since her cousin Milan Woods arrived, things have really stunk. Jamie can’t imagine it was easy for Milan to leave her life back in Los Angeles and move to Average, Illinois, population one thousand. But it’s kind of hard to feel sorry for her since (a) Milan’s drop-dead gorgeous; (b) she’s the daughter of two of Hollywood’s hottest film stars; (c) she’s captured the attention of everyone in town, including Danny, Jamie’s crush since forever; and (d) she’s about to steal the title of Pumpkin Princess right out from underneath Jamie! (from GoodReads)

The concept is a popular one. Pretty, city girl comes to a small town and annoys the main character until some big secret is revealed and helps the main character understand the other (and sometimes it's reversed with the new girl as the protagonist). Milan and Jamie are cousins but haven't seen each other since they were little kids. Jamie tries really hard to be nice and friendly to Milan but she doesn't care. I did feel bad for Jamie because she wasn't really being treated very fairly by her own parents or Milan. But once Jamie finds out why Milan can be so bratty, it sheds light on the entire situation.

Even though the ending was cheesy and predicable, I did like it because it was a happy one. I like when things work out. I also loved the setting! Jamie's family owns a pumpkin patch/farm and since I love Halloween/October/Fall, I would love to work there! We have one of those near my house and even though it's usually for little kids it's still a lot of fun to go.

If you're looking for a light and cute book, look no further than Just Your Average Princess. It's a quick read, too, I read it in about 2 hours.