The Queen of Everything by Deb Caletti 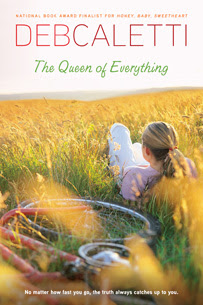 Summary:
High school junior Jordan MacKenzie’s life was pretty typical: fractured family, new boyfriend, dead-end job. She’d been living with her father (the predictable optometrist) since her mother (the hippie holdover) had become too embarrassing to be around. Jordan felt that she finally had as normal a life as she could. But then came Gayle D’Angelo. Jordan knew her father was dating Gayle and that Gayle was married. Jordan knew it was wrong, and that her father was becoming someone she didn’t recognize anymore, but what could she do about it? And how could she — how could anyone — have possibly guessed that this illicit love affair would implode in such a violent and disturbing way? (from GoodReads)

Review:
It's no secret that I love Deb Caletti; her writing is a lot like Sarah Dessen's but honestly I think I like Deb Caletti's better. It was obvious that The Queen of Everything was one of Caletti's earlier novels because it wasn't quite as good as some of her more recent work. I still enjoyed it very much, but it wouldn't be my first recommendation.

The summary made The Queen of Everything sound very scandalous, especially the ending words of "violent" and "disturbing." The novel did end that way, but it didn't feel very disturbing. As the reader, I felt very removed from the whole situation - and so did Jordan. Something very awful happens (I'm trying to not give away any spoilers, but it's hard!) but Jordan doesn't react the way most people would. Her response is almost muted, which I didn't like. I get that the book is about Jordan and not her father, but I think most people would be way more emotional than she was.

That being said, I wish Caletti delved further into Jordan's father's affair. Jordan finds out what is going on very quickly and few scenes show how distraught her father becomes. There are a few small things added in to show that the dad is losing it but they felt more like plot devices than a character unraveling. It just wasn't believable.

Even not enjoying the plot as much as I could have, I still liked The Queen of Everything. I liked reading about Jordan's relationships, such as with her grandparents, Big Mama, Jackson, her friend Melissa, her mother. There were a lot of great secondary characters that were awesome. As always I loved the setting: Washington State on an island, which is pretty sweet. I liked Jordan's thoughts on things and just the overall narration.

I really am a huge fan of Deb Caletti but The Queen of Everything wasn't my favorite of hers. I would definitely recommend her more recent work ahead of this (Stay and The Secret Life of Prince Charming are two personal favorites).