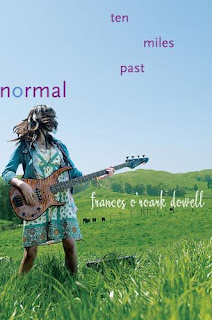 Summary:
Janie Gorman wants to be normal. The problem with that: she’s not. She’s smart and creative and a little bit funky. She’s also an unwilling player in her parents’ modern-hippy, let’s-live-on-a-goat-farm experiment (regretfully, instigated by a younger, much more enthusiastic Janie). This, to put it simply, is not helping Janie reach that “normal target.” She has to milk goats every day…and endure her mother’s pseudo celebrity in the homemade-life, crunchy mom blogosphere. Goodbye the days of frozen lasagna and suburban living, hello crazy long bus ride to high school and total isolation—and hovering embarrassments of all kinds. The fresh baked bread is good…the threat of homemade jeans, not so much.

It would be nice to go back to that old suburban life…or some grown up, high school version of it, complete with nice, normal boyfriends who wear crew neck sweaters and like social studies. So, what’s wrong with normal? Well, kind of everything. She knows that, of course, why else would she learn bass and join Jam Band, how else would she know to idolize infamous wild-child and high school senior Emma (her best friend Sarah’s older sister), why else would she get arrested while doing a school project on a local freedom school (jail was not part of the assignment). And, why else would she kind of be falling in "like" with a boy named Monster—yes, that is his real name. Janie was going for normal, but she missed her mark by about ten miles…and we mean that as a compliment.

Frances O’Roark Dowell’s fierce humor and keen eye make her YA debut literary and wise. In the spirit of John Green and E. Lockhart, Dowell’s relatable, quirky characters and clever, fluid writing prove that growing up gets complicated…and normal is WAY overrated. (From GoodReads)

Review:
I had a tough time getting into Ten Miles Past Normal at first, but once I did, I really enjoyed the book!

The beginning of Ten Miles Past Normal was a little boring; it was mostly Janie complaining about she hates living on a farm and that she has no friends. I felt bad for her, but I didn't think her life was that bad. However, once Janie decides to learn to play bass and starts researching some former civil rights activists in her community, Ten Miles Past Normal became a lot more interesting.

I liked seeing Janie come out her shell and grow a little. She starts by agreeing to learn bass so she can participate in her school's jam band. She makes a new friend/romantic interest Monster, who shows her the ropes. I thought it was awesome that Janie would step out of her comfort zone and try something new.

Janie's father is a historical researcher or something of the sort, and he takes Janie with him to visit Mr. Pritchard, a former civil rights activist. In the story, his wife and another woman started a school for African-Americans to learn to read and write so they could pass the literacy test required to vote. Janie and her best friend Sarah decide to do a project on the women on for their women studies class. The people were fictional but their story was still fascinating, since I'm sure there were people who did this in real life. I loved how the author tied in this with Janie's overall story, especially because she wants to "live large" as she puts it.

I thought that Ten Miles Past Normal was very cute and quirky and a fun coming-of-age story. I liked seeing Janie come out of her shell and not hate her life on the farm as she originally did. It was short too, so anyone looking for quick read, definitely check out this book!