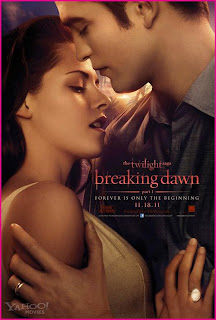 I have not done a Book vs. Movie post in awhile! I wasn't originally going to see Breaking Dawn in theaters because I didn't want to spend my money on it. But when my friend invited me, I decided to go since I was really curious about how they were going to adapt the book.

Breaking Dawn was my least favorite Twilight book, which is saying something because I don't really like the other books in the series. That being said, I think for the material they were given, the producers, director, etc did an okay job with it. Obviously it wasn't Oscar caliber but I still had a good time watching it. I've decided to list some thoughts in bullet points, since it's easier. No outright spoilers but maybe allusions to some, so beware.

- The acting is still pretty bad. Namely, Kristen Stewart. Everyone else is okay, but Kristen still needs some work.

- Even with not much going on in the movie, I still feel like they rushed things. There were certain storylines that they threw in there because they were never mentioned before. These include: the Denali coven, imprinting (not sure when this was introduced in the books) and the Volturi.

- Even though the movie rushed things, it was still pretty drawn out. Most of the movie is Bella pregnant and then some wolf-pack drama. Harry Potter made sense to be cut in two parts, but Breaking Dawn, not so much. The movie was only an hour and a half, so they definitely could have done 1 two and a half hour movie.

- Supposedly people have been getting seizures from the red and white flashes in the movie. Ididn't think it was too bad but I don't get motion sickness at all, so what do I know?

- The birth scene was pretty freaky. It wasn't super graphic (Breaking Dawn is only rated PG-13) but the weirdness (giving birth to a vampire baby) of it all made it worse.

So those are my thoughts on Breaking Dawn. The only positive I can think of is that it didn't completely suck but wasn't that great either.
Posted by Simply_Megan at 10:51 AM

Hm, haha, good to know. We've heard mixed things about the acting (some people saying the same as you, some saying the exact opposite) but let's be honest, we're not watching these movies for the acting anyway, lol. We just like seeing the books come to life. We did like the books (well, except Breaking Dawn, but at that point, we couldn't really stop) so we're happy to relive them in film form.

Thanks for sharing your thoughts! It's always nice to know what to expect.

saw the movie...kristen was amazing she will win plenty awards for this one...watch and see

I agree with a lot of what you posted about the new Breaking Dawn movie. I am a fan of the Twilight series and a huge fan of Stephenie Meyer as a writer and I thought Breaking Dawn did ok. I did not have high expectations for the movie but I did enjoy it much to my surprise. The new director did some awesome camera work and added to the story which I think worked out in the end. I've really only watched all of the movies to get to the end of Breaking Dawn so I hope the last movie does well.