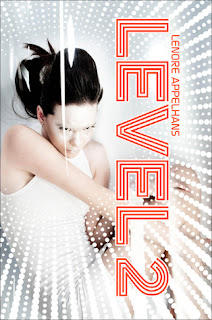 Summary:
Three levels. Two loves. One choice. Debut novelist Lenore Appelhans has written a thrilling otherworldly young adult novel about a place that exists between our world (Level 1) and what comes after life (Level 2).

"I pause to look around the hive - all the pod-like chambers are lit up as the drones shoot up on memories ... I've wanted to get out of here before, but now the tight quarters start to choke me. There has to be more to death than this."

Felicia Ward is dead. Trapped in a stark white afterlife limbo, she spends endless days replaying memories, of her family, friends, boyfriend ... and of the guy who broke her heart. The guy who has just broken into Level 2 to find her.

Felicia learns that a rebellion is brewing, and it seems she is the key. Suspended between heaven and earth, she must make a choice. Between two worlds, two lives and two loves. (from GoodReads)

Review:
I was so excited to read Level 2 because it's the 2013 debut of fellow blogger Presenting Lenore! How awesome it must be to be a published author - it's quite the accomplishment. Luckily for Lenore, she has a great book on her hands. There were some things I didn't like, but overall I thought the story of Level 2 was extremely interesting.

I wasn't sure what to expect when I first picked up Level 2, especially because some of the synopses I had read were vague. I didn't know it was going to be a story of the afterlife, but I really liked that concept. Especially the idea that we can replay our favorite memories over and over again; it's similar to the "life flashing before your eyes" idea. The world of Level 2 was very mechanical and sterile - everything is white and futuristic - but that setting worked well.

My favorite parts of Level 2 were when Felicia accessed her memories. Sometimes she revisited her experiences as a diplomat's daughter living abroad (that was the coolest part) or her life in the States with her boyfriend Neil. I thought these moments were the most compelling and gave Felicia some depth. Her character is a little flat when she's in Level 2 (she is dead, after all) and her singular focus on finding Neil bordered on obnoxious.

The plot moves at a steady pace throughout a majority of the novel. The reader is introduced to potential love interest Julian, who's background is very mysterious, both in Level 2 and in Felicia's memories. However, the last twenty pages are pretty rushed, with a lot of information dumped on the reader. I almost had book whiplash from the way the plot quickly jumps from point to point. That was my biggest problem with Level 2 - the ending should have been developed better.

Level 2 ended in a way that it could be a standalone book, but there are plans for a sequel. There are still some unanswered questions so I'd definitely be interested in continuing on with this series. Overall, I liked Level 2 and thought it had a very original concept.

This book sounds interesting :) I'm not going to lie, I mostly want to read it because Lenore is a blogger turned author which is very cool! :P

Yay for the success of blog-friends!