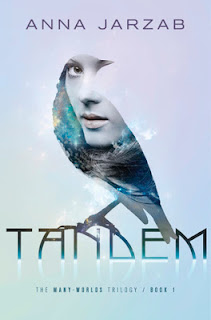 Everything repeats.
You. Your best friend. Every person you know.
Many worlds. Many lives--infinite possibilities.
Welcome to the multiverse.

Sixteen-year-old Sasha Lawson has only ever known one small, ordinary life. When she was young, she loved her grandfather's stories of parallel worlds inhabited by girls who looked like her but led totally different lives. Sasha never believed such worlds were real--until now, when she finds herself thrust into one against her will.

To prevent imminent war, Sasha must slip into the life of an alternate version of herself, a princess who has vanished on the eve of her arranged marriage. If Sasha succeeds in fooling everyone, she will be returned home; if she fails, she'll be trapped in another girl's life forever. As time runs out, Sasha finds herself torn between two worlds, two lives, and two young men vying for her love--one who knows her secret, and one who thinks she's someone she's not.

The first book in the Many-Worlds Trilogy, Tandem is a riveting saga of love and betrayal set in parallel universes in which nothing--and no one--is what it seems. (from GoodReads)

This sounds really interesting - I like the idea of parallel worlds. And Anna Jarzab is a wonderful author so I'm sure this book will be amazing. Tandem will be released October 8, 2013.
Posted by Simply_Megan at 9:44 AM

Tandem sounds amazing. I hadn't heard of it before, but it sounds like something I would love. Great pick!
Em @ A Beautiful Madness
My WOW

Interesting...the parallel world concept sounds like it will be very cool. Thanks for sharing!

I love the idea of parallel worlds too. I've never read a Jarzab novel but this might end up being my first.