Waiting on Wednesday was started by Jill at Breaking the Spine for bloggers and readers who like to see what new books are going to be released.

The Moon and More by Sarah Dessen 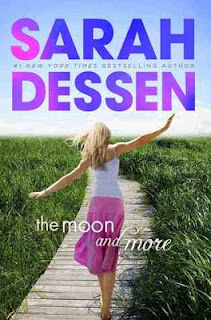 Luke is the perfect boyfriend: handsome, kind, fun. He and Emaline have been together all through high school in Colby, the beach town where they both grew up. But now, in the summer before college, Emaline wonders if perfect is good enough.

Enter Theo, a super-ambitious outsider, a New Yorker assisting on a documentary film about a reclusive local artist. Theo's sophisticated, exciting, and, best of all, he thinks Emaline is much too smart for Colby.

Emaline's mostly-absentee father, too, thinks Emaline should have a bigger life, and he's convinced that an Ivy League education is the only route to realizing her potential. Emaline is attracted to the bright future that Theo and her father promise. But she also clings to the deep roots of her loving mother, stepfather, and sisters. Can she ignore the pull of the happily familiar world of Colby?

Emaline wants the moon and more, but how can she balance where she comes from with where she's going?

Sarah Dessen's devoted fans will welcome this story of romance, yearning, and, finally, empowerment. It could only happen in the summer. (from GoodReads)

It's another Sarah Dessen book! I think that's all I need to say about it. The Moon and More will be released June 4, 2013.
Posted by Simply_Megan at 8:57 AM

I haven't read anything by Sarah Dessen but I heard lots of good things about her books. Will try her works once of these days.

Oooh, pretty cover. I haven't read any of her books yet, actually!

I freaking love Sarah Dessen and I can't wait to read this one. Great WoW pick!

Sarah Dessen is all I need to see on a book to want it-I've read all her previous books and can't wait to check this one out!

How can you go wrong with Sarah Dessen?? :)

Utterly Lovely choice for this "Waiting on Wednesday" post :) It looks awesome!

Waiting on Wednesday @ the Brunette Librarian