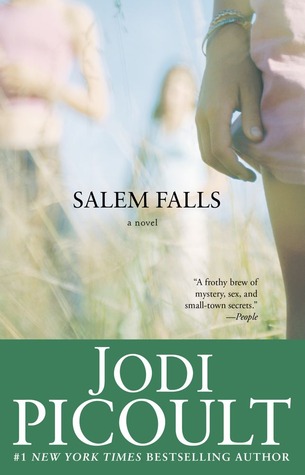 Summary:
A handsome stranger comes to the sleepy New England town of Salem Falls in hopes of burying his past: Once a teacher at a girls' prep school, Jack St. Bride was destroyed when a student's crush sparked a powder keg of accusation. Now, washing dishes for Addie Peabody at the Do-Or-Diner, he slips quietly into his new routine, and Addie finds this unassuming man fitting easily inside her heart. But amid the rustic calm of Salem Falls, a quartet of teenage girls harbor dark secrets -- and they maliciously target Jack with a shattering allegation. Now, at the center of a modern-day witch hunt, Jack is forced once again to proclaim his innocence: to a town searching for answers, to a justice system where truth becomes a slippery concept written in shades of gray, and to the woman who has come to love him. (from GoodReads)

Review:
Ah, back to the Picoult I know and love. Reading her first ever novel was definitely an experience and it's interesting to see how far she's come and how much better at writing and plotting she is. This book isn't even that new but those 10 years really helped her out.

The main crux of Salem Falls is what happens during a false rape accusation, especially if the accused is already a sex offender. It's unfortunate that this happens to Jack because he's actually a really good guy. I have a slight problem with these stories because it makes it sound like there are all these girls that just want to ruin some poor man's life by accusing him of rape. In reality those statistics are really small but obviously it does and could happen and that's where Salem Falls comes in.

As always, I love the multilayered plot and revolving points-of-view of several main characters. Jodi Picoult is able to expertly weave backstories and flashbacks amid all the action and I'm constantly amazed by her skill. The ambiguity of the ending is both interesting and frustrating. I don't have too much to say about Salem Falls other than that I really enjoyed it and it remains a classic Picoult novel.

Rating: 8 out of 10.
FTC: borrowed from the library