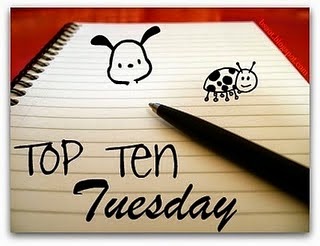 1. Bones - I love this show so much that I even wrote a research paper on it for my pop culture class. For those who don't know, it follows a crime-solving duo: FBI agent and forensic anthropologist who can identify bodies by their bones. It's pretty gory but the character development and chemistry between the two leads is amazing.

2. Supernatural - The fact that this show is entering its 10th season blows my mind. I love spooky stories so obviously it's right up my alley, though the relationship between the two brothers though is what makes the show.

3. The Office - I love the humor of this show and the fact that it was still funny even after Steve Carrell left. I miss it so much!

4. House - This was probably one of the first "adult" shows I watched regularly and it's because medicine/human anatomy fascinates me (I wanted to be a doctor for a long time). I also like how each patient is a mystery that House needs to solve.

5. The Vampire Diaries - I pretty much only tuned into this show because Ian Somerhalder is in it (see below: LOST) but it ended up being amazing! It's losing steam now that it's hit 5 seasons but the middle seasons were literally crazy. Twists and turns in every episode!

6. The Colbert Report - I watch this show religiously and never miss an episode! I don't know what I'm going to do when Colbert goes onto the Late Show. Cry a lot probably.

7. How I Met Your Mother - This show is so funny but also has a very unique storytelling method. I love the unreliable narrators and flashbacks that keep it interesting. I also LOVED the finale!

8. LOST - This is the first show I watched on Netflix, though it was nowhere near a binge. What a great sci fi show.

9. Brooklyn 9-9 - There's only been one season so far so I may be jumping the gun but I really enjoyed what I saw and thought it was hilarious! It definitely deserved that Golden Globe.

10. The Twilight Zone - Gotta have a classic on here! I love when SyFy has the New Year's marathon, which is a tradition with my family.
Posted by Simply_Megan at 10:00 AM