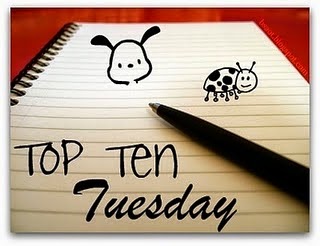 1. Kasie West - I've heard such good things about all of her books and I really need to read On the Fence.

2. F. Scott Fitzgerald - I've only read The Great Gatsby and I know his other books are just as good.

3. Livia Blackburne - I just finished her debut novel, Midnight Thief, which is why I haven't read anything else by her yet. Can't wait for the sequel though.

4. Jenny Han - This might not count because I read the first Summer book but never finished it. But after reading To All The Boys I've Loved Before I think she's a fantastic writer.

5. Megan Shepherd - Still need to read the sequel to The Madman's Daughter

6. Kevin Roose - I was just looking in the library for his newest book but they didn't have it. It's about the culture of banking on Wall Street.

8. April Lindner - Loved reading Jane and have yet to read her other novels.

9. Daisy Whitney - Still need to read the sequel to The Mockingbirds.

10. Stacey Jay - So many of her books are on my To Read list but I've only read You Are So Undead to Me.