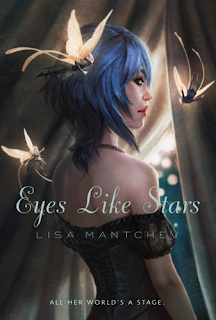 All her world’s a stage.

Beatrice Shakespeare Smith is not an actress, yet she lives in a theater. She’s not an orphan, but she has no parents. She knows every part, but she has no lines of her own. That is, until now.

Welcome to the Théâtre Illuminata, where the actors of every play ever written can be found behind the curtain. They were born to play their parts, and are bound to the Théâtre by The Book—an ancient and magical tome of scripts. Bertie is not one of them, but they are her family—and she is about to lose them all and the only home she has ever known. (Summary taken from Amazon)
I fell in love with Eyes Like Stars. I'll admit it - at the beginning of the book I wasn't too sure what I thought. At first, it's confusing because Lisa Mantchev has created this whole new world that I have never seen before. Bertie lives in a theater full of characters from Shakespeare plays and other theatrical works. And these people - the Players - are more of characters than actual people, and are bound by an ancient text to stay in the theater and put on shows. Bertie is human, and I felt really connected her. I liked that she stood out from the other characters; it was like the author was trying to differentiate between humans and the Players by making Bertie this funny, sassy, and vibrant girl. Everything she said and did was witty and at times I found myself laughing out loud.
The other supporting characters, though they were Players, were also interesting and had their own distinct personalites: from sweet Nate to seductive Ariel to the four silly fairies from A Midsummer Night's Dream. The play Hamlet is important to the storyline, so it was nice that I had read it in school. I haven't read a lot of Shakespeare, so I was glad that I was familiar with the characters and storyline of Hamlet. But I feel like people who don't like theater or fantasy or both will be turned off by Eyes Like Stars. I like theater, so that wasn't a problem for me, but if you can't stand musicals/plays, this might not be your cup of tea. I would still give this book a chance, because I enjoyed it a lot and thought it was a great story, but I understand that this book will not fit everyone's tastes. It's just a warning though. I think (and hope) that a lot of people will find this book entertaining. All in all, Eyes Like Stars was a beautiful performance of a book.
9 out of 10.
Release Date: July 7, 2009
Posted by Simply_Megan at 4:26 PM

So bad we didn't study much Shakespears at school. I think I have to read Hamlet first in order to enjoy the book. Thanks for the review!

I can't wait to read this book. The cover's beautiful, I love theater, and it looks like a great summer read. :)

I wanted to let you know that I have a giveaway for Beautiful Americans on my site right now that I think you might like. You entered one of my previous giveaways, so I thought you might be interested: http://mrsvsreviews.blogspot.com/2009/07/mrs-vs-monthly-giveaway.html

Ahh I just bought this book for a plane ride. I see many people have thought it was good and I'm glad. I can't wait to read it. Great review.
BTW I'm having a book giveaway, it's ending soon, and I'm just letting people know so that if they want they can enter it. It's international and pretty easy.