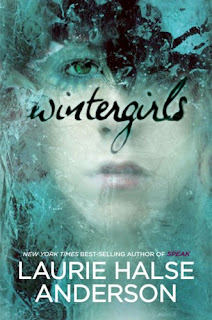 Lia and Cassie were best friends, wintergirls frozen in matchstick bodies. But now Cassie is dead. Lia's mother is busy saving other people's lives. Her father is away on business. Her step-mother is clueless. And the voice inside Lia's head keeps telling to her remain in control, stay strong, lose more, weigh less. If she keeps on going this way - thin, thinner, thinnest - maybe she'll disappear altogether.

In her most emotionally wrenching, lyrically written book since the National Book Award finalist Speak, best-selling author Laurie Halse Anderson explores one girl's chilling descent into the all-consuming vortex of anorexia. (Taken from inside flap)
Wintergirls was disturbing. It was scary and it was sad. But it was also powerful. I could not put it down. I was exhausted after our championship meet, but I couldn't sleep until I finished the last fifteen pages. Somehow, without me realizing it, I was sucked into this book. At first, I was wary of reading Wintergirls because I wasn't sure if I would be able to relate to Lia since I don't have an eating disorder. But I was glad I read it because I got an inside look into Lia's mind and began to understand the illness a little better. I liked how the whole book was full of Lia's thoughts and there were even things crossed out and re-written as Lia internally edited her feelings.
The book was definitely disturbing, as we see Lia drop in weight and go whole days only eating a cracker. And even though this book and Lia's actions were difficult to read about, I truly felt sad for Lia and that her compulsion to control one part of her life translated into an eating disorder. But as I was reading Wintergirls, I felt like I was reading something important. I hope that this book will bring awareness to eating disorders and maybe inspire people suffering from anorexia and bulimia to reach out for help.
8 out of 10.
Posted by Simply_Megan at 6:55 PM

Good review! I have yet to read thsi book. I've never read anything by Laurie Halse Anderson, but the things I hear about her writing are nothing but amazing.

I will have to try reading this one again. Maybe I was in the wrong mood for it. Your review makes me want to give it another go.
I really liked Speak by Anderson.

Great book, and great review. LHA rocks so much. And anon--I agree, Speak was great.

LHA does depressing but true so well.