Prophecy of the Sisters by Michelle Zink 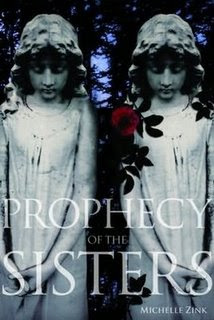 Lia, her twin sister Alice, and younger brother Henry are now orphans. Like their mother a decade before, their father has recently and mysteriously died, so now they are in the care of their Aunt Virginia. The same day that she became parentless, however, Lia notices strange mark on her wrist. She soon discovers that the mark ties her to an ancient prophecy, one that has pitted generations of sisters against each other. Hiding her discovery from everyone she loves, including her sister and beau, James, Lia attempts to unravel the prophecy before it's too late.

I know a lot of people really liked Prophecy of the Sisters, but I wasn't that impressed by it. I wanted to love it, because I had heard great things about it. Instead, I felt like the author was so close to writing a good book, but didn't go that extra step. Not to say that Prophecy of the Sisters wasn't enjoyable or entertaining, because it was, it just wasn't all that good. In short, the book is pretty much about two sisters who are on different sides: one's good and one's evil. Lia and Alice are twins, and supposedly they used to be close, but now are not. I wish the author provided more backstory so we could witness the change and learn more about these two girls. The author just jumped into the story without explaining anything else, and it took awhile for the reader to become acquainted with the two main characters. I also thought the book was really predictable. There were some "twists" that I guessed would happen before they actually did.

Prophecy of the Sisters has also been likened to the Gemma Doyle trilogy, but I don't think it's anywhere near as good as that series. It's definitely similar, so if you enjoyed A Great and Terrible Beauty, you'll be familiar with some of the themes present in this book. Fortunately, Prophecy of the Sisters is supposed to be a trilogy, so I think we'll get more backstory on both Lia and Alice, and then the prophecy itself. Hopefully, those extra books will add more depth to this series. 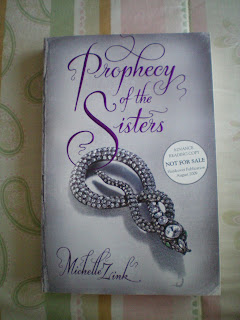 Side Note: This is the cover of the ARC, but I thought it was cool, even though I like the hardcover better. I discovered from Reading Keeps You Sane's On the Outside post that this cover was meant for the hardcover, but enough reviewers didn't like it, that they decided to change it. Which do you like better?
Posted by Simply_Megan at 6:09 PM

I really don't think I would enjoy this book. I liked A Great and Terrible Beauty, but it wasn't my cup of tea. So I guess I know that I probably wouldn't like this book.

Hmm. Both covers are alright. I prefer the angel statue one.
I have an ARC of this book and always wondered if I should pick it up next. Thanks for the review!

I don't think so it suits to my taste so i didn't like the book.... it's having terrible beauty it seems..
Carol
Get the best FREE offers on the Best Home security Systems