Book vs. Movie: The Last Song 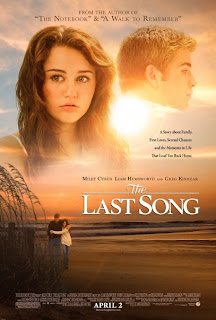 A few nights ago I watched The Last Song. I really had no interest in seeing it, but when I read the book I wanted to see what they changed and what they kept the same. So here's a mini review. No spoilers for either the book or movie, so don't worry about that :)

The Last Song movie wasn't too bad, and followed the book pretty well. This makes sense, since Nicholas Sparks wrote the screenplay first and then the novel. Pretty much everything in the book can be found in the movie, with a few minor changes and everything shortened a little so the movie didn't have to be five hours long. I thought Greg Kinnear did a good job as the dad, and the actor who played Ronnie's little brother was so adorable!
The only thing that I have to comment on is Miley Cyrus. I have nothing against her personally, but I honestly believe that she cannot act or sing. I don't want to bash her, but it was comical watching her portray a "rebel" teen and her portrayal of Ronnie's grief was shallow at best. I really wish they had picked another actress because this movie could be a lot better. It also didn't help that Miley had the worse dialogue in the movie. I wonder who wrote her lines (*cough*Nicholas Sparks*cough*)? Or maybe the lines just sounded cheesy by the way Miley was saying them. I don't know. I'm only mentioning this because I really think it will make or break how you enjoy the movie. If you like Miley, you'll probably love this. If not, you might want to stay away.
All in all, the movie wasn't horrible, but I probably wouldn't recommend it to anyone. If you've read the book and want to see the characters and plot in movie form than you can see it. Otherwise, beware.
Posted by Simply_Megan at 1:36 PM

i think you do not know what a good movie the last song.... have morals and etc.. but like many others you seems to hate Miley even though you said; you have nothing against her, want your article publish so want ever sell, i am a sixty yrs grandma and i enjoy good movie, has nothing to do with who is acting , the story is the most important, and for a first timer in drama scene, i think Ms Cyrus did a good pretty good job.