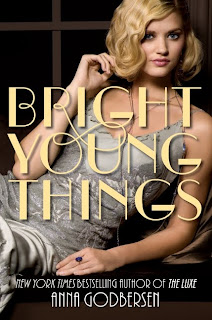 Summary:
The year is 1929. New York is ruled by the bright young things: flappers and socialites seeking thrills and chasing dreams in the anything-goes era of the Roaring Twenties.

Letty Larkspur and Cordelia Grey escaped their small Midwestern town for New York's glittering metropolis. All Letty wants is to see her name in lights, but she quickly discovers Manhattan is filled with pretty girls who will do anything to be a star...

Cordelia is seraching for the father she's never known, a man as infamous for his wild parties as he is for his shadowy schemes. Overnight, she enters a world more thrilling and glamorous than she ever could have imagined - and more dangerous. It's a life anyone would kill for... and someone will.

The only person Cordelia can trust is Astrid Donal, a flapper who seems to have it all: money, looks, and the love of Cordelia's brother Charlie. But Astrid's perfect veneer hides a score of family secrets.

Across the vast lawns of Long Island, in the illicit speakeasies of Manhattan, and on the blinding stages of Broadway, the three girls' fortunes will rise and fall - together and apart. From the New York Times bestselling author of The Luxe comes an epic new series set in the dizzying last summer of the Jazz Age. (from book jacket)

Review:
I loved The Luxe series by Anna Godbersen (though I still haven't read the last book, Splendor) so when I heard that she wrote another book set in the 1920s, I really wanted to read it. I love the Twenties and books that take place in that loose and frivolous era (especially The Great Gatsby). Bright Young Things follows three girls, Cordelia, Letty, and Astrid, and their experiences living in New York City at the end of the Twenties. I would love to live in this time period but the whole Great Depression happening right after kind of puts a damper on everything.

Anna Godbersen is a good writer in that she is really detailed and her facts seem historically accurate. Her writing is what I would call luxurious: kind of slow and silky so it makes you feel like you are living in New York City with the Cordelia, Astrid and Letty. However, since it is so slow, it sometimes translates to the story and plot. A lot happens in Bright Young Things, but it happens pretty slowly. If you are looking for something fast and exciting, this is probaby not the book for you.

Also, the fact that the novel is written in third person really distances the reader from the characters. While I liked them all, I didn't actually feel a connection with any of the girls. While, these things prevented me from loving Bright Young Things, I still enjoyed reading it a lot and would definitely read the sequel when it is published.

I liked the references to The Great Gatsby. Cordelia's father, Darius Grey, is a bootlegger and is known for his wild parties just like Jay Gatsby. They were actually pretty similar characters but I can't go into detail because it's spoilery.

So all in all, I loved the setting of Bright Young Things and the storyline in general, though the slow-moving plot and distant characterizations prevented me from loving it. If you enjoyed Godbersen's other series, I would definitely recommend this.