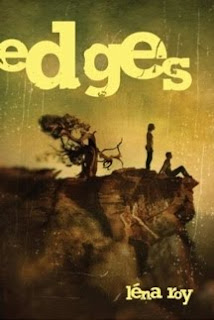 Summary:
It is a story of love and grief, addiction and redemption, set in both NYC’s Upper West Side and in the red rock desert of Moab, Utah.

Seventeen-year-old Luke lives and works at the Moonflower Motel in Moab, having fled New York City where his father Frank drowns his sorrows after the death of Luke’s mother. Back in New York, eighteen-year-old Ava meets Frank at an Alcoholics Anonymous meeting. When these lost souls converge in Moab, what happens transforms them all. (From GoodReads)
Review:
I probably would never pick up Edges on my own - both the cover and synopsis don't really appeal to me - but since I received it for review I decided to give it a chance. And I am really glad I did because Edges was way better than I expected.
First, I loved the setting of Moab, Utah, which is where half the novel takes place. There are so many popular locales for books, movies, and TV (namely New York City, and the other half of Edges does take place here) that it was nice to see something totally different. Moab is in the desert and the narration really made the red rocks and sand sound beautiful. The way this place is described made me want to visit it, which is surprising because the desert is not some place that I would normally want to go.
Edges alternates between the perspectives of Luke and Ava. Two very different characters, but that also have a ton of connections. Luke runs away to Moab after his father begins suffering from alcoholism and lives at a youth hostel run by Ava's parents. Ava is an alcoholic (albeit a very young one) and she meets Luke's father at AA meetings. After this great of a connection you know that the two characters will meet up someday and that they do, although their meeting is brief.
I didn't realize in the beginning how big of a role alcoholism plays in the novel. And it's great to get both perspectives - that of an alcoholic and that of someone whose family member is an alcoholic. Anyone who has to deal with alcoholism in any way will enjoy this book for both views it presents. I thought that Lena Roy did an excellent job describing the struggles, challenges, and heartbreak that come with this addiction, while also conveying hope and optimism in her story.
Edges was an extremely short novel, but I still felt like I knew all the characters - even the ones on the periphery, including Tangerine, Jim and Clare (Ava's parents), Charlie and Cin. Every character, however small, had some depth to them, which made for a nice read. I liked that Edges showed the hard parts of alcoholism, while still being hopeful and inspirational.
Rating: 8 out of 10.
FTC: reviewed through the Henry Holt InGroup
2010/Farrar Straus Giroux/162 pages.
Posted by Simply_Megan at 3:34 PM