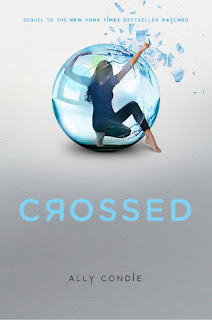 Summary:
In this sequel to Matched, Cassia leaves her home to work in the Outer Provinces. No one knows that she's actually on the search for Ky, who was sent to another work camp. But when she hears that Ky has escaped into the desolate canyons, Cassia leaves the Society and follows him. During her search, Cassia hears more talk of the Rising, a rebellion that is planning to overthrow the Society. She desperately wants to join and is willing to sacrifice anything to be a part of something important.

Review:
Crossed was an okay novel and I liked it well enough. The writing was good but the plot was nonexistent. It's obvious that Crossed is the second book of the trilogy because not that much happens and it is used as a build up for the final book. Unfortunately, this makes Crossed pretty boring. I enjoyed the writing, but that didn't make up for the lack of action.

It also doesn't help that I don't actually believe that Ky and Cassia are in love. Their relationship/romance in Matched was written so poorly and the readers were just told that they loved each other even though they interacted like three times throughout the novel. So it was hard to read about how much they loved each other because I just didn't believe it.

The book is also split into two parts, which Ky and Cassia each taking turns to narrate. I liked this a lot, especially when the two were separated, because the reader could see what each was doing. However, as soon as their stories intersect, the double narration is annoying because I could never tell you was actually talking.

Despite the slow pace, there were still enough twists and turns in Crossed to make me want to read the last novel in the trilogy. I don't know if I'll actually read it or just look up some spoilers online to see what happens.

Hm. We liked Matched, so we're disappointed to read that Crossed isn't living up. (Your review is not the only one that suggests that.) Sigh... Thanks for the honesty, though! We always prefer knowing what to expect.