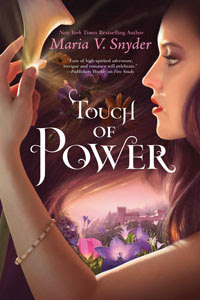 Laying hands upon the injured and dying, Avry of Kazan assumes their wounds and diseases into herself. But rather than being honored for her skills, she is hunted. Healers like Avry are accused of spreading the plague that has decimated the Territories, leaving the survivors in a state of chaos.

Stressed and tired from hiding, Avry is abducted by a band of rogues who, shockingly, value her gift above the golden bounty offered for her capture. Their leader, an enigmatic captor-protector with powers of his own, is unequivocal in his demands: Avry must heal a plague-stricken prince—leader of a campaign against her people. As they traverse the daunting Nine Mountains, beset by mercenaries and magical dangers, Avry must decide who is worth healing and what is worth dying for. Because the price of peace may well be her life...(from GoodReads)

This book reminds me a little of Shannon Hale's Books of Bayern series, which I love. I'm not usually big on high fantasy, but this sounds like it could be really good! Hopefully it lives up to my expectations. Touch of Power will be released on December 20, 2011.
Posted by Simply_Megan at 3:04 PM

Wow can't wait to read this one. I've heard a lot about it. Thanks for sharing :)

I LOVED Maria V. Snyder's Study series can't wait until this one is out! Great Pick!

Ack! I did not know Maria V. Snyder was coming out with a new series! Oh, I am so excited.

Great pick! I saw this one on Netgalley and it does sound good!

Giselle
Xpresso Reads
Btw- I'm giving away an ARC of Legend and it ends tonight if you haven't entered yet. ;)

Sam @ Books For All Seasons said...

Maria V. Snyder is a good author. Touch of Power will be another good read. Hope you like it. :)